The world-premiere full-stage production of d4rkly your retrorockets fl4re, written by Steven Mark Tenney and co-directed with his sister Susan Tenney, is presented by The Constellation Project as part of this summer’s Planet Connections Theatre Festivity, after having won the award for Best Staged Reading in last year’s festival. Fourth in the playwright’s sci-fi series (begun in 2013, with a fifth and sixth installment now in progress), the futuristic coming-of-age fantasy, recalling the style of a B movie, follows the adventures of the young author Raiku, traveling through time and space to find a cure for her writer’s block.

Filled with nearly three dozen strange characters, curious encounters, mystifying props, arcane video projections (designed by Lindsea Bevington), and invented Greco-Latinizing language and monikers (like Chrono-Agen-Tress, Gothopedia, and Decembria), the narrative, personages, and humor are often difficult to follow (a “Character Guidebook” on the back page of the over-sized program is hard to read in the dark theater, so offers little help). The protagonist herself, portrayed by Theresa Johnson, wryly questions, “What just happened?” and “Who made up these names?” The noted confusion is exacerbated by the bad acoustics in the room and the lead actress’s indistinct enunciation. With a running time of two and a half hours, the script could benefit from some tightening, to alleviate its overblown complexity and redundancies, and for its parodic laughs to have more of an impact.

Highlights of the show include the original otherworldly music composed by live musicians Topu Iyo and Mike Thies, and sung by cast members Erkin Osmanli, Gillian Bennett, and Michelle Tsai (the duets by Osmanli and Bennett are especially evocative). Dancers Yukari Osaka, Mizuki Sato, Emily Morrison, and Laura Bowers execute Susan Tenney’s seemingly weightless choreography with exquisite grace, beauty, and fluidity, as they float through the space (accentuated by Janet Mervin’s cosmic costumes) and impress with their stunning extensions. All of the musicians, singers, and dancers succeed in setting a haunting mood that transports us to another realm.

Among the standouts in the uneven cast are the commanding Alenka Kraigher as the Snow X Night, Second Corrective, and Celestron; the powerful Sven Haabeth as Mort-d’Mer; and the multi-talented Osmanli as Fanning, a Singer in the Band, and Raiku’s Boyfriend from the Future, who is thoroughly alluring in his expressive performances. Mervin dresses them and their castmates in an imaginative synthesis of space-age and Goth styles, and lighting by Joe Novak contributes to the preternatural drama. 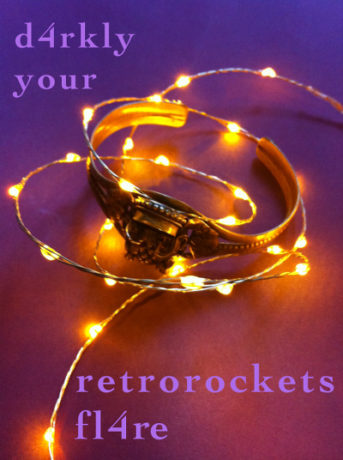 d4rkly your retrorockets fl4re, plays through Sunday, July 2, 2017, performing at the Flamboyán Theater in the Clemente Center – 107 Suffolk Street, NYC. For tickets, purchase them online.