This year marks the centenary of the beginning of America’s involvement in World War I in 1917, and The Sheen Center has recognized it with the stellar world premiere of Death Comes for the War Poets by British-born writer Joseph Pearce. A co-presentation of Blackfriars Repertory Theatre and The Storm Theatre Company, the stirring three-hander was conceived by Pearce as “a dramatic verse tapestry” that brilliantly interweaves song, dance, prose, and video projections with the poetry of Siegfried Sassoon and Wilfred Owen – two English poets and decorated soldiers who met in a psychiatric military hospital during “the war to end all wars.” Impeccably directed by Peter Dobbins, the haunting production gives horrific insight into trench warfare, makes a powerful anti-war statement that resonates now and for all time, reflects metaphysically on the greater meaning of life and death, and offers the hope for salvation through faith.

Nicholas Carriere and Michael Raver portray the eponymous war poets Sassoon and Owen with understanding and passion, fully inhabiting their characters, capturing their emotions, psychology, and development, physically re-enacting the devastating events of their active duty, and offering firsthand testimonies on the “scourge of war” and the grim realities of death. Raver, who bears a striking resemblance to the real-life Owen, is broken and distraught, stuttering and compulsively moving his fingers in telling manifestations of his mental agitation and trauma, while expressing his admiration for Sassoon and his bold public condemnations of the war. Carriere masterfully defines Sassoon’s journey, believably changing his demeanor from rapturous to angry, sarcastic to pious, as he transitions from his early poetic exaltation of the beauty of life, to his critical recognition of the “ugly truth” of war and his contempt for those who perpetuate and cheer it (without having experienced its true horrors), to his eventual conversion to Catholicism and his uplifting belief in the “sanctity of silence” and “the paradox of paradise” that ultimately brings peace through death.

Sarah Naughton rounds out the stellar cast in a mesmerizing appearance as the personification of Death. She looms, menaces, and entices with songs and dances that change in style through time, while her power remains omnipresent, in an age-old message of memento mori (“remember that you must die”). Pearce includes additional apt references to the historical traditions of “the kiss of death” and the “danse macabre” (with choreography by Jennifer Delac), which Naughton executes with chilling panache. In the end, with Sassoon’s growing spirituality, she transforms from a threatening dark spirit to a gentle and radiant essence that brings comfort and tranquility. All three actors turn in flawless and affecting performances, endowing their roles with a significance that is at once realistic and metaphorical, entertaining and didactic, personal and universal.

Dobbins’ blocking makes full use of the black box theater’s multi-level space, actively moving the characters around, and implementing precise postures and gestures that perfectly conjure the wartime activities and atrocities to which they were subjected. The top-notch cast and director are supported by a first-rate design team that skillfully augments the theme and the mood. Connor W. Munion’s runway set is in the form of a cross, flanked by church walls at each end, on which projections by Joey Moro show news footage and photos of soldiers and war scenes, the star-filled heavens and glowing stained-glass windows. Kenneth Goodwin’s sound ranges from Catholic hymns to the gunshots and explosions of battle; lighting by Michael Abrams accentuates the drama with spotlights that illuminate figures in the darkness and colors that suit their personae (red for Death, gold for Sassoon’s religious conversion); and well-styled costumes by Jennipher Pacheco define the characters and their changes, from soldier to civilian, from an ominous Death to one that is soothing.

Death Comes for the War Poets is a rare and meaningful work with historic relevance, an inventive format, and a powerful message. It’s a play that should enjoy a long life beyond its exceptional debut at The Sheen Center. 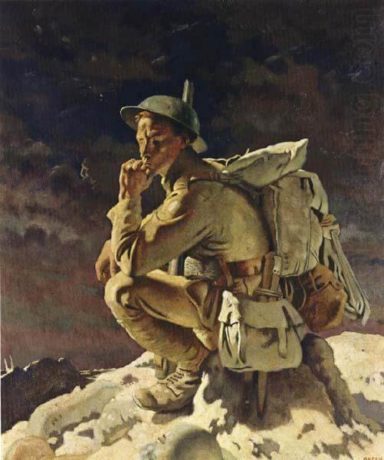