On Friday, June 23rd, the Columbia Festival of the Arts brought up the curtain on another edition of the wonderfully unusual, Baltimore-based performing arts group, Stoop Storytelling, at the Smith Theatre at the Horowitz Center at Howard Community College. 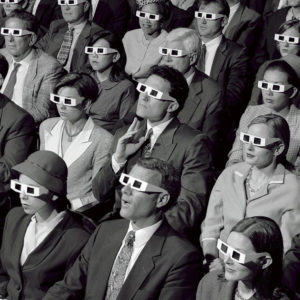 Stoop Storytelling’s events have been a popular in Baltimore since its inception in 2006. Six or seven people from all walks of life get to tell a personal tale on a given topic. Each person gets about seven minutes. After intermission, a few members of the audience are chosen to tell their own three-minute story. Friday night’s topic was My Favorite Film. Some of the performers talked about how their own favorite film changed or influenced their lives. Others stretched and strayed a little farther from the topic but still had an interesting story. Leading the performers tonight and offering some light moments were Laura Henkin, one of the founders, and her husband Aaron.

The first speaker tonight was Josh Slates, who is a film critic for The Signal on radio station WYPR. Slates’ story revolved around his love of Hong Kong Action Movies, which he developed from renting them from a Chinese grocery story in Columbia, Missouri. Eventually, with the help of the radio station where he works with Aaron Henkin, he was able to attend the Hong Kong International Film Festival.

Next up was Rahne Alexander, an artist, musician, writer, editor, and producer whose life-altering movie was Thelma and Louise. It came at a time when she was finishing up at college and in a relationship. If the movie did not actually empower her, it did reinforce many of her life’s decisions. It also reflected the popular culture of the time, the early 1990s.

Tommy Sinbazo is a professional comedian. His tale was not life-changing, but did involve some mind-altering drugs. Sinbazo went to see Star Trek: Into Darkness after eating a sizeable amount of “shrooms.” He had a small paranoiac reaction to the hallucinogen and had to leave the theater. This was followed by some more carousing and a very embarrassing, but funny moment.

Morgan Smith grew up in Annapolis and went to Friday night movies at St. John’s College with his friends as they were free. He became so enamored with French movie, A Band of Outsiders, he gave up thoughts of taking a business career track in college and went to study film in Santa Fe. Although he now is a businessman, his film background has made him approach his work in a different way than his peers.

After Intermission, we heard from our three audience volunteers, who all had interesting personal tales.

The next scheduled storyteller was Barbara Treasure, a watercolor artist from Baltimore who was greatly influenced in a college film course where she worked as a projectionist. The movie that changed her life was the Seven Samurai by Akira Kurosawa. The samurai helped besieged farmers and sacrificed to better mankind. This moved Treasure to become an art therapist. She could give those in need a part of herself to help make the world a better place like the heroes in the movie.

The final speaker was Tia Price. Her story was not really about film, but rather a movie from her mind. This image was of a life experience that she had as a child: dealing, as a black American, with the police. It was really horrifying to relive this with her and made us realize that things are still different for blacks in America. Price uses this story to connect with her students at Wide Angle Youth Media.

To catch a podcast of Friday night’s performance, to hear podcasts on other topics, or to find out about their upcoming performances at the The Senator Theater in Baltimore – including a tribute to Barbara Mikulski on October 12, 2017 – visit Stoop Storytelling online.

‘The Show Must Go On!’ Preview, Part 2: Interview with Jessica Myles Henkin by Patricia Mitchell.