The night I went to see the opera Les Mamelles de Tiresias, I was not expecting to hear a duet about bacon.

I’d gone to the dress rehearsal of the Wolf Trap Opera Company’s production knowing nothing about the story, and what I saw was the single weirdest thing I’d ever seen on an opera stage. The lovers were fighting about bacon. The clowns were repeatedly murdering each other. The abandoned husband somehow births 40,049 babies in a single day—and then grows rich off their artistic careers. The plot, such as it was, kicked off with the titular (so to speak) feminist Therese/Tiresias discovering that her breasts have become balloons that float away, allowing her to become a man. It was like classical music smashed Hunter S. Thompson and spent a week tripping balls at Burning Man.

My first thought was, Wow, this would be an amazing story for a burlesque and variety show. My second thought was, And that would make one hell of a Fringe show. Before I knew it, Tiresias’ Tits was born. 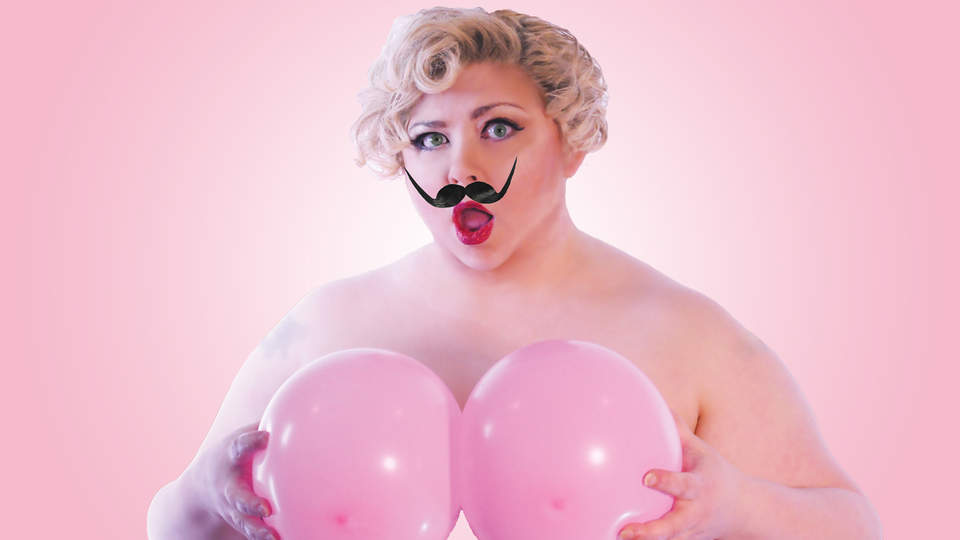 This is a show that brings together the two loves of my performing life—weird, experimental, comic theater and neo-burlesque. Burlesque, with its history of mocking the powers-that-be, subverting the status quo, and playing fast and loose with gender norms, fits perfectly with the farce and absurdist social commentary of the opera’s source material, the 1917 Apollinaire play of the same name (for which the term “surrealism” was coined—take that to pub trivia night).

For Tiresias, I wrote a modernized script based on Apollinaire’s story, moving it from Zanzibar (a seemingly-random setting) to a fictional DC-ish neighborhood of Little Zanzibar. I kept many of my favorite aspects of the play—the bacon, the balloons, the babies, the buffoons—while either bringing them into a more modern context and/or connecting them to new plot elements. The eternally-dueling duo of Presto and Lacouf, for example, whose fights in the original play are largely about whether they are in Paris or Zanzibar, I recast as a pair of shamelessly corrupt and inept politicians battling over the gentrification of Little Zanzibar into the hipster Paris Heights. Apollinaire placed an actor dressed as a news kiosk in the background of his scenes; I kept the idea through the Puckish character of Social Media. The reporter who interviews Mari, the baby-making husband, has gotten updated to an ambitious YouTuber seeking a juicy reality TV show subject to exploit.

Despite all its gleefully ridiculous humor, the original Les Mamelles has hints of somberness, reflecting France’s need to rebuild and repopulate in the wake of WWI. I think that’s the thing that tipped it for me and told me that this was the year I was going to write and produce Tiresias; in the wake of the election and this national nightmare from which we can’t seem to escape, I wanted to tap into our collective outrage and also create a comic outlet to let off some steam. We poke fun at the “weekend social justice warrior” aspects of protest culture with its “On Saturdays, we march, on Sundays, we brunch” branch of activism, while also trying to re-create some of the genuinely infectious energy of rising up in resistance, of having something worth fighting for. Therese’s transformation into Tiresias might be a delightfully strange spectacle, but her frustration with married life’s unfair domestic burden will be all-too-familiar to any woman exhausted by trying to “have it all”.

For the cast, it was important to Director Sean Butler and to myself as producer and playwright to find the right mix of burlesque/variety performers who are great actors, and actors whose talents include novelty and dance skills. We are lucky to have gotten both, with a cast that includes popular local burlesque performers Buster Britches, Cherie Sweetbottom, and Shortstaxx as well as several members of DC’s oldest queer burlesque troupe, the DC Gurly Show. On the actor’s side, we’re graced with multi-talents that include Boneza Valdez Hanchock, Alexandra Wehr, Chantal Martineau, and Cristina Sanchez. We also sought to cast as diversely as possible across gender, race, size, age, and orientation, with a cast that is entirely genderqueer/nonbinary-through-woman-identified and heavily queer-identified.

I hope that we’ll be able to give Tiresias’ Tits audiences the same experience I had seeing that opera, of being caught up and delighted by the sheer weirdness of it. I want you—yes, YOU—to kick back and enjoy this stage full of performers dancing, clowning, stripping, singing, doing drag, having cartoonish battles and farcical flash mobs and remorselessly kicking down the fourth wall. I hope you’re energized and entertained, ready to go hang out at the bar in Fringe Central afterward and strike up a great conversation with someone—maybe one of us, we’ll certainly be there!—and feeling like you had a great night out. That’s our mission at Eclectic Mayhem Productions, and we’re proud to offer a sophomore show that so completely captures everything we’re about. 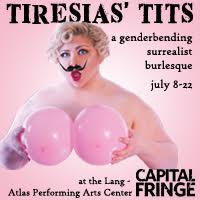