The fallout of the financial crisis is still being thrashed out in full public view, which makes for a terribly difficult documentary subject; we are a long way from knowing where most of it actually ends. Steve James, the documentarian behind The Interrupters, Life Itself, and Hoop Dreams, has found a tiny self-contained story inside the vast umbrella of the financial crisis that only recently found a conclusion: the travails of the Sung family, the owners and operators of Abacus Federal Savings Bank, a small bank servicing the Chinese immigrant community in New York City. The charges against Abacus, 19 of its employees, and the founder of the bank, Thomas Sung, remain the only criminal indictments brought to any bank explicitly linked to fraudulence in connection with the mortgage crisis.

At its core, Abacus is a story of injustice, or rather, two, nested, injustices. First, there is the injustice of the criminal justice system singling out a tiny family bank for prosecution, when they themselves were victims of fraud which they had discovered and duly reported to the appropriate authorities. The second injustice is that the amount of resources poured into the Abacus prosecution have not been applied to any of the banks or bankers who were actually responsible for the toxicity of the mortgage market. One of the observers of the Sung family’s story summed it up in a way that gives the film it’s subtitle: “Too big to fail turns into small enough to jail.”

Steve James opens Abacus: Small Enough to Jail with Thomas Sung and his wife watching one of the most important scenes in It’s a Wonderful Life – the bank run on George Bailey’s savings and loan. It’s a Wonderful Life is remembered for all kinds of things, bells ringing and angels and lassoing the moon, but the core of that film is the relationship between the people who run a bank and the people who use it. George Bailey does right by folk and that’s why the community needs him and why everything would be so much worse without him. More than one contemporaneous observer notes that Thomas Sung is a real life version of Jimmy Stewart’s famous banker with a big heart.

It’s not hard to empathize with banker Thomas Sung as he explains that he started his company when he saw that New York banks were more than happy to take the money of Chinese immigrants but were much less willing to lend to them. Complicating the story of the Sungs is that a community bank is the messy intersection between the informal and formal economy. The prosecution spins lack of documentation and tax filings from grocers and other small businesspeople as fraud, even as those people support a bank with one of the lowest rates of default in the nation. So while the community appears to benefit, according to the lens applied by the DA to Abacus and absolutely no other banks, Abacus Federal Savings is riddled with corruption. The tension of these two viewpoints provides extraordinary drama to the trial at the center of this story. 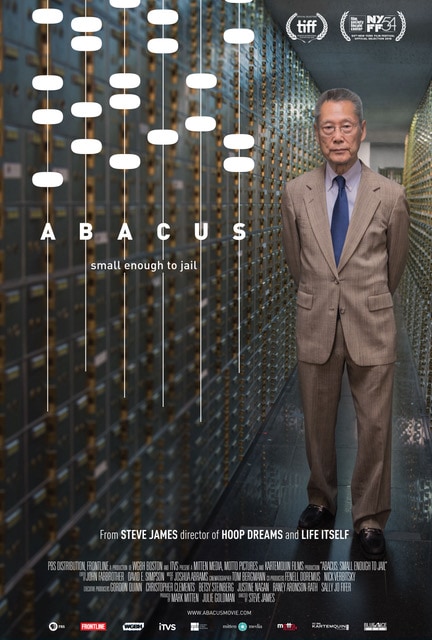 Abacus is ultimately a drama about a family caught up in much larger cultural currents well outside their control and how they survive. James offers unflinching views of the strains this places on the family, showing us exhausting and frustrating conversations, which also demonstrate their bond as a family. James provides a human face for the decision-makers usually masked by institutional walls and gives a crucial insight into the nature of banking at it’s most primal, the connection between deposits and loans, and how a bank facilitates a community making itself better. Abacus Federal Savings Bank and Thomas Sung are the best of what banks can do and Abacus is a story of this idea under assault from the forces that should be attacking fraud and theft at a vastly different level. Sung and his family’s bank are a direct contrast to the methods of the large banks and shadow banks who actually created a crisis that threatened the well-being of the entire world, doing things that Thomas Sung and his bank never dreamed of doing. Abacus: Small Enough to Jail is an against-all-odds story of the smallest David you could imagine, in a world of Goliaths working very hard not to be blamed for their failures. It is a riveting lament of the Sung’s predicament and a visceral reminder of the myriad ways the financial crisis has spawned injustice since 2008. But it is also a reminder that George Bailey isn’t just a fictional character and that just maybe the world would be better off if there were more bankers like George Bailey and Thomas, Vera, Jill, and Heather Sung.