Gun violence, socio-religious intolerance, same-sex marriage, and gay adoption are some of the current hot-button issues that tear apart a family, polarize a community, and create a media frenzy in small-town Texas, in The Crusade of Connor Stephens. Written and directed by Dewey Moss, the contemporary tragedy, in keeping with today’s headlines, contrasts a spirit of love and acceptance with a climate of judgment and condemnation, and shows the effect vitriolic words can have on innocent lives.

While the intensity of Moss’s theme sometimes crosses the line into melodrama and histrionics, the impassioned beliefs contained in the story are not unfamiliar. A compelling cast of eight displays the characters’ deeply felt emotions, inherent moral codes, and dysfunctional dynamics, as they slowly reveal momentous secrets and expose skeletons in the family closet that span across three generations and culminate in a series of explosive confrontations.

Ben Curtis and Alec Shaw bring sensitivity to their characterizations of Jim Jr. and Kris, each dealing in his own way with the devastating loss they have endured as a couple. Jim sits in stunned silence, staring into space and numbing his pain with liquor, internalizing his feelings as he always has, while the injured Kris breaks down into bouts of uncontrollable sobbing and questions his own survival. Julie Campbell and Jacques Mitchell as Kris’s sister Kimmy and brother-in-law Bobby offer the men their unconditional love and support, suffer along with them, and try to help in any way they can, then show their increasing contempt for Jim’s estranged family. They are sympathetic role models of devotion, caring, and loyalty.

James Kiberd is thoroughly detestable as Jim’s father Big Jim, the domineering self-righteous religious zealot who preaches about sin and evil to his congregation, and sews the seeds of hatred in an impressionable young follower, ultimately showing more compassion and forgiveness for him than he does for the victims in his own family. Katherine Leask as his wife (and Jim Jr.’s mother) Marianne plays the part of an embittered downtrodden woman, who defers to her husband, forsakes their son, and strikes out with malice at both Kris and her mother-in-law Vivi’n, lacking the strength and self-esteem to defy Big Jim. By comparison, Kathleen Huber as the feisty Grandma Vivi’n evinces the development of a mature woman who will no longer remain quiet, once she recognizes the oppression and loss she suffered at the hands of Big Jim, and embraces the love she feels for her grandson and his husband. Rounding out the cast is Clifton Samuels as Big Jim’s protégé Dean – a devout believer who shows his true inner character by doing the right thing and telling the truth, even if it means exposing his mentor.

While the staging of the antipathy between Vivi’n and Marianne is realistic and palpable, as they bicker, exchange insults, and barely tolerate one another, the final family showdown lacks credibility, as tempers flare and some come to blows (fight choreography by Galway McCullough), but all stand quietly and listen to each other’s harangues without interruption. Although the format of speaking one at a time allows for clarity in our apprehension of the individual diatribes, it seems counter-intuitive that the enflamed characters would wait patiently to be heard, instead of shouting simultaneously.

David M. Lawson’s sound design sets the stage for the timely narrative with relevant news reports and noisy throngs of reporters heard each time the protagonists’ door is opened. James Noone provides an efficient set that allows the actors to move around the living room (a few stuffed animals are a heartbreaking touch), on and off the stage to an unseen bedroom, and outside the home to address the questioning crowds – with the audience serving as surrogates, left to weigh the opposing sentiments. Lighting by Zach Blane gives focus to Big Jim’s fervent sermons, and costumes by Teresa Snider-Stein are in keeping with the personalities of the figures.

The Crusade of Connor Stephens is a powerful examination of important issues that plague our society, shining a spotlight on bigotry, hatred, and the deadly violence in which they all-too-frequently result. 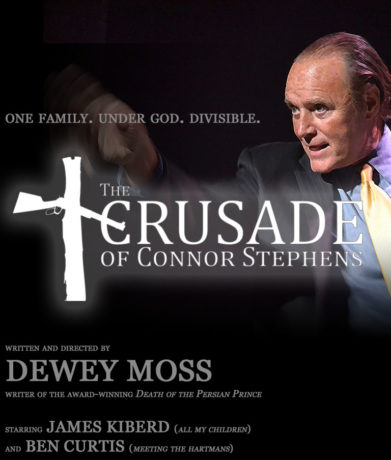