Mr. Taken — it’s a sex comedy with an emotional heart.

The sex comedies of late 20th century – such as Joe Orton’s What the Butler Saw or Foote and Marriott’s No Sex Please, We’re British had basic characteristics that helped defined the genre. There are a lot of people coming in and out of doors – causing surprises and catching people doing things that look embarrassing. And while there is no actual sex in a sex comedy, there is lots of innuendo and people in various stages of undress.

The show Mr. Taken, uses these elements in a 21s century show. Since this is a Fringe production there are no actual doors, but there are more than 70 entrances and exits in the 90-minute show. Each entrance producing a surprise to at least one character (or the audience) either right away or within two lines.

As for people in various stages of undress – each of the six characters removes clothes at some point in the show. In fact, author Ward Kay realized before he started writing the final confrontation scene that one character had not disrobed. So the character of Charles, who is a favorite character, and who had only appeared in scene one, needed to be included in the final scene and there had to be a reason for him to take his clothes off.

The 20h century sex comedies were farces. But in the twenty-first century, we don’t titter at titties like people did forty years ago watching Benny Hill. We expect more depth in our theater. Mr. Taken is a comedy that is based in real emotions. Jeannie Melcher who plays Jen claims that the break-up scene she has includes “the meanest thing that anyone has ever said to any of my characters in any show.”

Also unlike the earlier sex comedies, Mr. Taken is seen from the female’s perspective. The focus is on the friendship between the three women. It is their friendship that is ruptured by the events of the play.

The play starts with three couples in that age range between college and marriage. One couple is just dating, one couple just got engaged and the other couple is just about to end with an emotional outburst.

Jen and Marcus (Jeannie Melcher and Dominic Shannon) have been living together for three years, but things are going south. Marcus wonders how he went from the life of the party at his frat house to an office drone with a hermit home life. Jen wants the perfect relationship, which means Marcus doing what she wants.

Liz and Eric (Valerie Holt and Andrey Chekalin) may have just gotten engaged, but Liz is aware that the battle to keep Eric is not over. Eric may not have the most romantic reason to propose, but he did. And she is going to do whatever she can to keep him.

Patty and Charles (Brooke Bangston and Jamel Lewis) have dated a few times. Charles is a nice guy but not the right guy. Patty is seeing two other guys besides Charles. There is a fourth guy she likes, but he is Mr. Taken. 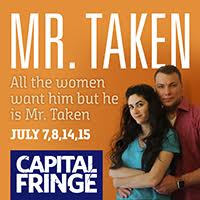