Those who’ve forgotten Peter Pan are destined to repeat it in Finding Neverland. The U.S. national tour now at Baltimore’s Hippodrome Theatre until July 2 makes for a dreamy midsummer night’s entertainment, with the added value of a great-looking production and an opportunity to reacquaint oneself with the charms of long-time musical star John Davidson.

This 2015 Broadway adaptation of Allen Knee’s 1998 play The Man Who Was Peter Pan has a book by James Graham and music and lyrics by Gary Barlow and Eliot Kennedy. The songs are all yeomanly and pleasant, sometimes rising above the expected, especially “All That Matters” and “When Your Feet Don’t Touch the Ground.” Some of the bouncier concoctions sound like they could have been written for the Partridge Family.

Finding Neverland went through numerous workshop revisions. The final script adheres closer to the 2004 British-American movie of the same title, which starred Johnny Depp as J.M. Barrie. This creation, in short, continues the harmless trend of retrofitting a recent movie with songs and hoping it results in something more organically musical on stage.

Billy Harrigan-Tighe, who was so good as Elder Price in the national tour of The Book of Mormon, is hampered this time around by the musical’s unconvincing portrait of J.M. Barrie. Harrigan-Tighe has a wonderful singing voice and fine comic instincts, but his J.M. Barrie seems less like an astute observer of human mannerisms than a sitcom father racing around the farcical edges of a problem.

Under pressure to come up with a new play for bullying producer Charles Frohman, the Scottish author (only five foot-three in real life) undergoes a period of soul-searching while wiling away afternoons in Kensington Gardens with the young sons of widow Sylvia Llewelyn Davies. Eventually their bouts of make-believe escapism coalesce into Barrie’s vision of “The Boy Who Wouldn’t Grow Up.”

Christine Dwyer, best known for playing Maureen in Rent on multiple regional tours, brings an incredible voice to the show’s better musical moments: “What You Mean To Me” and “Sylvia’s Lullaby.”

It is John Davidson, though, who has the showiest dual role as Charles Frohman and Captain Hook, getting the utmost in comedy and presence from each. Almost unrecognizable in his bundled hair and portly stance, Davidson shatters the harsh impression of a misanthrope (and secret pirate) with an occasional rascally flash of that familiar dimple-cheeked grin. Five decades of media interference falls and we remember his brilliant, iconic performance on live TV as the Boy in The Fantasticks. (You can still enjoy it on YouTube.)

Kristine Reese as the author’s aloof “trophy” wife, Mary Barrie, is squandered in another of the show’s thankless roles — a former leading actress who has apparently sacrificed her career for a passionless and childless marriage. But what we see of her is believable enough, and as a singer she acquits herself very nicely in the number “Circus of Your Mind.”

Others in supporting roles here are more limited in burlesque caricatures of stuffy British archetypes. Karen Murphy’s rigid Madame Du Maurier and Noah Plomgren’s buffoonish Lord Canaan come off as so uber-snooty, for instance, they could never have existed as anything but slapstick fodder.

Many of the supposed actors in the Frohman theatrical company fare far better. Standouts here are Dwelvan David as Mr. Henshaw, Matt Wolpe as Cromer, Corey Rives as Albert, Caitlyn Caughell as Miss Jones and Victoria Huston-Elem as Miss Bassett. Thomas Miller often gets his laughs as the put-upon stage manager, Elliott.

A large pool of alternating juveniles play the four Llewelyn children. On review night that ensemble inspired (and deserved) some heartfelt ovations.

Director Diane Paulus who won a well deserved Tony Award for that recent revival of Pippin, kicks up all the pixie dust she can find in the script, which pays off in both pace and eye-appeal. Some magic is added by Choreographer Mia Michaels, especially in the flying illusions and the staging of the wondrous pirate ship materialization that ends Act I.

As throughout all this wonderful season of theater at the Hippodrome, technical expertise was applied to every aspect of the visiting production. Projection Designer Jon Driscoll, Lighting Designer Kenneth Posner and Scenic Designer Scott Pask could only be very proud today of how their fine work was treated in Baltimore.

Running Time: Two hours and 40 minutes, with one 15-minute intermission. 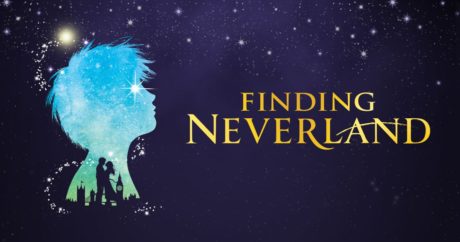 Finding Neverland plays through July 2, 2017 at the Hippodrome Theatre at The France-Merrick Performing Arts Center – 12 North Eutaw Street, in Baltimore, MD. For tickets, call (800) 982-ARTS, or purchase them online.