First of all, I don’t remember where I was on November 22, 1963 at 12:40 pm, CST when CBS News interrupted, As the World Turns to announce “In Dallas, Texas, three shots were fired at President Kennedy’s motorcade.” I was probably in kindergarten at the time.

But what I do remember vividly is the afternoon word swept thru our neighborhood that Mickey Miller’s older sister was reading a book that claimed the official story was wrong and that the President was killed by “conspiracy.” This was probably sometime, late in 1966, and the book was most likely Mark Lane’s landmark, Rush to Judgment. I’m not sure why but somehow with this idea there was more to the story that I found intriguing. It made some sense and did not disturb me although I never did see the book. When I went home and mentioned this book to my mother, she looked pained and didn’t wish to discuss it any further. To her it was simple; Dallas had killed the President.

Even the football team?
I replied while rolling my eyes.
Yes, she said.

Now that was one conspiracy theory I never believed.

But low and behold some 50 years later another book, Dallas 1963 comes along with just that charge. The book describes a city torn and “poisoned by the hate of polarizing ideologies.” And you learn in that book that Texas oil families long suspected, in some JFK plot lines, were also NFL team owners, and even behind the inspiration of the Super Bowl.

So what happened there at high noon on Elm Street in Big D?  A nightmare, of course. But luckily for us three fine actors are able to make the disquieting playLancer & Lace eminently watchable.

Playing the President is an international film actor Michael Brzezinski. Jackie Kennedy is performed by Sarah Ulstrup, a stage and film actor from Washington D.C. (Wilson High School). Sarah has a BA in Theater from Oberlin College and a degree in Film Acting from The Prague Film School. The Agent is played by Zak Webb.

For most Americans, just the thought of political assassination in their homeland is distressing stuff. And to try to write a play about it, is a joyless undertaking. For just how far down the rabbit hole do you and the audience intend to go?

Well, in this play, Lancer & Lace. 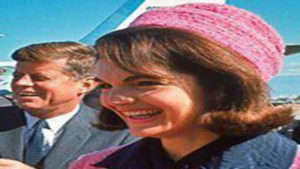