“Love is like a tree: it grows by itself, roots itself deeply in our being and continues to flourish over a heart in ruin. The inexplicable fact is that the blinder it is, the more tenacious it is. It is never stronger than when it is completely unreasonable.” ~ Victor Hugo, The Hunchback of Notre-Dame

Playwright and Composer Mark Ivan Branche has rendered a compelling musical exploration of the complexities of love and loyalty, and the enigma of good and evil in humanity, in Truth and Confessions, his musical version of The Hunchback of Notre-Dame, presented in concert by Standing Ovation Theatre Company. It’s set in Paris in the vicinity of the Notre Dame Cathedral, where Quasimodo (Nathaniel Barber) works as bell ringer under Frollo (Michael Powell), a fiendish priest who condemns the beautiful gypsy girl, Esmerelda (Samantha Ricchiuti) for dancing in public. Frollo suffers his own censure for the forbidden feelings she arouses in him, which fuel his desire to punish her in order to end his own diabolical confliction. Esmerelda will not stop dancing freely, declaring to Frollo, in honest defiance, “The sin is in your heart. My dancing is like talking.” Her own personal folly is falling in love with the handsome Captain of the King’s Guard, Phoebus (Kevin Gauntner), who is enamored of himself, and engaged to another. Even as Esmerelda follows her heart, Quasimodo is ever diligent in pursuit of her well-being, even to the point of pushing aside his own feelings to please and protect her with sincere devotion, to the best of his ability. The unrelenting Frollo makes life hellish for the object of his fancy exercising his power through deception and treachery, but rays of purity and light fight to pierce the veil of sorrow.

The pulsing energy coursing through the ensemble/chorus also fought to overcome an opening night technical glitch which left some of the words to the music indiscernible under the instrumental music, but the enthusiasm remained loud and clear! Kudos to the cast for keeping up the production’s vitality. Particularly perky is the opening group number “Give Us a Play” and the Act I number “The Pillary,” as well as “The Trial” and “To War” in Act II. Barber’s solo “If Wish That I Were Made of Stone” is touching, and “The Reunion” – a duet between Ricchiuti, who makes the part of Esmerelda pop, and soprano Zanna Yoshida as the reclusive Gudule – is resplendent.

The black box, concert version set (designed by Branche) consists of an adorned backdrop featuring attractive stained glass windows, suggestive of a cathedral, stairs and various cubed boxes, which are used to good affect, as is the available lighting (also designed by Branche). Costuming (Cast) is an interesting medley of modern day outfits in motifs of black and white.

Truth and Confessions appears to be a show that will progress and perfect throughout its premiere run in Philadelphia, after which the production company hopes to expand and develop this work to present other area audiences and venues. Stay tuned… 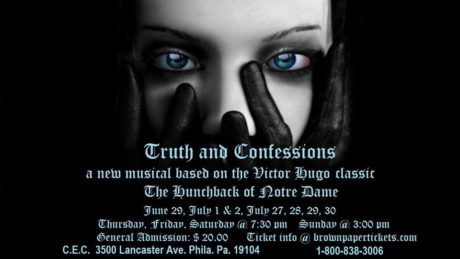 Truth and Confessions plays through Thursday, July 30, 2017, and is presented by Standing Ovation Theatre Company, performing at The Community Education Center – 3500 Lancaster Avenue, in Philadelphia, PA. For tickets, call (800) 838-3006, or purchase them online.