A hearty bro-hug to The Kennedy Center and to the National Symphony Orchestra’s (NSO) new Artistic Advisor, Ben Folds, for having the joint jumping at the recent late night Declassified event. It was a delightful, unstuffy community “date-night” affair, especially for those denizens who might regularly be seen pouring out of H Street, 14th Street, and Clarendon venues. What a welcome sight at the marble-walled, lushly carpeted corridors of the august Kennedy Center.

As Folds wrote about his new role with the NSO: “I get to bring together my favorite musical artists of today with the nation’s symphony orchestra for a collaborative performance this inaugural concert from the Ben Folds Presents series spotlights a unique multi-genre melding of 21st-century pop and orchestral music for all ages.”

With under-writing from the DC area’s monument and important historical papers saviors, David and Alice Rubenstein, and additional under-writing by Sydney and Jay Johnson, the on-going Friday night Declassified series curated by Ben Folds was a forward-looking fun affair. It was also, in its own way, a participatory affair, that melded and mingled pop culture with diverse contemporary singers and songwriters with the high art of a classical orchestra.

The evening’s sit-down entertainment was the brainchild of Folds. First, as curated, hosted and performed by Folds with the NSO, it was an accessible, relaxed evening. The NSO was guest conducted by Jacomo Bairos. Joining the musical evening were singer/composer/producer/guitarist Blake Mills and Cuban R&B/rap singer Danay Suárez.

But before describing in detail the evening’s performances, let me set the scene. This is not silly at all. For as the average age of classical concertgoers has aged in the past decade or so, The Kennedy Center seems clearly and refreshingly aware that it must look forward to the next generation of DC area arts and entertainment goers, with their own sensibilities: the Millennial generation.

Walking down the long main Kennedy Center foyer taking in audiences ready to see Hedwig and the Angry Inch (Eisenhower Theater) or The Sound of Music (Opera House), I was easily drawn to the high-energy vibe I could see and hear in front of the Concert Hall.

Filling the area in front of the Concert Hall and spilling out into the warm summer breeze, were hundreds of folk. They were dressed in a wide array of informal styles, from colorful summer T’s to open-collar dress shirts and even a tie here and there. There were stylish shorts and bright summer frocks as well as footwear from sneakers to polished dress shoes, from stylist flip-flops to stiletto heels. It was all the welcome diversity that DC is.

On the small stage by the Concert Hall, there was entertainment, provided by the plaintive, soulful, voice of DC Native Be Steadwell with her backup band. Behind Steadwell were arresting silhouette images of dancers and movement to match the musical numbers.

Folks from Port City Brewery were ensconced near the glass doors leading outside to The Kennedy Center’s Friday night outdoor patio. The line was long, but fast moving as patrons were greeted with a smile and an explanation for different beer tastes. (I promise: I only observed as a reporter)

I could see that weekday stresses were lifting off many a shoulder as folk mingled, socialized, and engaged one another.

Outside on the patio was the Hot Pink Photo Booth to always remember the occasion in style. Including 4th of July props and costumes. Heck, there was even a bag toss. Some even gazed up at the two giant cranes helping to build out the expanded Kennedy Center campus.

After an hour of mixing, it was time for the main event. Folds vision of music selections included orchestra music that any middle aged or Baby Boomer audience at the Concert Hall would recognize with contemporary songs with fine, lush orchestration for the NSO. The orchestration was way more than merely adding strings to a guitar.

For me, the 90 minutes with the NSO was a full blown, multi-movement “classic” concert with lively allegro, and slowed down adagio. It was like a sinuous curve of sounds and instruments and voice. There were big NSO-featured numbers, and smaller pieces with a single voice featured. Adding to the interactive nature of the evening, both Folds and conductor Bairos were lively interlocutors. And sometimes, warm-ups for the audience. It worked for me (and my wife too.)

The performance song list included music of flare and substance, of love gained and love lost, and of what the NSO musicians can do beyond what many may know them for at The Kennedy Center or their summer time haunt at Wolf Trap.

So after 90 minutes sitting, we, the audience poured out of the Concert Hall. Ah, but the evening was clearly not over. There was live, lively, “after-party” to begin with a karaoke band already playing to serenade us. And then folk took their shot on stage with HariKaroke.

All in all, a quality evening at The Kennedy Center. It was my first taste of Ben Folds’ visions for Declassified. It was a nearly 4-hour extravaganza that I certainly hope will bring new and diverse home-grown audiences to The Kennedy Center. Yeah, I know disrupting old ways is never easy, but it is essential.

Let me add this personal cultural value statement. There was a major generational to-do in the music world some years ago in the world I inhabited. It was a brutal time. It was about which side you were on when Dylan went electric. Friendships were lost, honestly. I for one was with the disruptive forces and energy of electric. The Kennedy Center is doing the same in its own small but important ways. So plugin, but don’t tune out.

Ben Folds’ ideas may take time to find a returning audience; it may take time for those audiences than to move down The Kennedy Center foyer for other fare. But isn’t it worth trying? 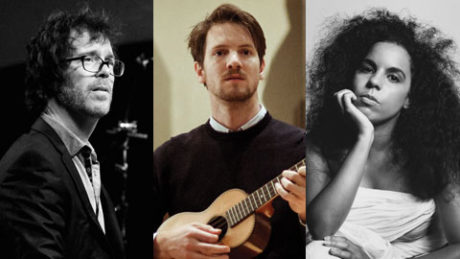 National Symphony Orchestra’s Declassified was performed on June 30, 2017, at 8 p.m. in the Concert Hall at The John F. Kennedy Center for the Performing Arts – 2700 F Street, NW, in Washington, DC. For future Declassified events go online.