Broadway itself was trying to figure out its place in a world of love beads, beards, and bare feet. Younger theatergoers saw fare such as Camelot or Carousel as square, out of touch, and not relevant to their experiences. Godspell and its cohorts (all creatively and spiritually birthed by the surprising success of 1967’s Hair) gave Broadway — and the nation’s cultural conversation — a new direction to explore.Godspell is a “Greatest Hits,” if you will, of the Gospels of Matthew and Luke. In its script form, it’s a thinly connected series of parables, delivered by Jesus to a group of disciples. Plot is largely eschewed for the first act, and it isn’t until close to the end of the second that Godspell attempts a narrative, going from the Last Supper to Jesus’s death. Though Godspell and Jesus Christ Superstar are often talked about as if they’re related works, the relation is really only with the source material and main character. They are entirely different musicals, and musical experiences.Ostroff’s conceit for Infinity’s production is this: What if Godspell were set during a rehearsal of the television sketch comedy show Saturday Night Live? It’s an interesting idea, and one the musical allows since the show is really just a series of vignettes that fits well into SNL’s skit format. Quinn Stone’s set is entirely convincing as a main stage for a sketch comedy show, putting the band onstage, and the audience in the right mindset. The set accentuates the energy and pulse of the opening of the show as we watch a taping get started, and the pieces all come into place. You feel you’re actually at a live shooting, because the set is so intelligently designed.

The live band adds to the verisimilitude, under the solid and amazing direction of Laura Mueller. It’s also always thrilling watching great musicians in the act of being great musicians. Here is how and why live theater works as well as it does: it’s a kind of physics, where energy is transferred, enhanced, transposed, and resurged. And that kind of exchange between audience and artist is what empowers all of us in that ecosystem. When Godspell works — and, in those musical moments, it almost always soars — it works in no small part because of the band.This Godspell has one of the most cohesive ensembles I’ve heard in awhile. Each voice, individually, stands out for solos, sure, and we’ll get to that. But together, this cast is almost unbeatable. Each cast member’s voice is recognizable, but never feels like it’s attempting to pull focus. They blend beautifully on such numbers as “Day by Day” and “Prepare Ye.” Wes Shippee’s sound design complements and supports these singers, allowing nuance and clarity in each voice individually, but then too in those ensemble moments. The voices in this production of Godspell are not to be missed.

The standout number of the night is “All for the Best.” What starts as vaudeville routine between Jesus (Kyle Hines, whose voice I’ll be marrying in a quiet ceremony in my backyard because I want to honor the hippie spirit of Godspell) and John the Baptist (Andy Baldwin, who is able to look simultaneously handsome and yet with a deep-shouldered slouch I was told would keep me single the rest of my life) turns into a rollicking chorus line, complete with canes and straw hats. In fact, it’s such a show stopper that it’s a little confusing that it doesn’t, in fact, stop the show. J.P. Coletta’s heartbreakingly beautiful “All Good Gifts” eases us into “Light of the World” before the intermission.If Godspell, the musical, is a “Greatest Hits” of the gospels, then this production is also a “Greatest Hits” of Saturday Night Live. And therein is the issue. How much you will love this Godspell will depend on how much you enjoy the conceit that this is all an episode of SNL. Since there may be some pleasure in discovering the various homages and references to episodes past, I’ll leave the specifics vague. I will say that the two ideas — the earnest, love-your-brother-sister-father-mother-as-yourself of Godspell; the dark irony and comedic cruelty of SNL — don’t sit well together in this production. Godspell’s music and message are too kind, too patient, too loving. SNL is a 90-minute sketch comedy show that tries. There are moments in this show that work (for example, a Ferris Bueller joke that is executed to perfection by Grant Bowen as Matthew Broderick and Ashley D. Buster as Jennifer Grey); but more often I found myself cringing uncomfortably, waiting for the next musical number to relax my jaw. (So, in some ways, Ostroff has perfectly captured my specific experience of sketch comedy, which is more often than not a deep feeling of shared shame and embarrassment.)A bit of hyperbole fans and enthusiasts will often throw out is, for example, “I love Abe Vigoda so much, I’d listen to Abe Vigoda read the phone book.” (Miss you, Abe.) It’s a lovely way of explaining that one’s love of something transcends all trappings. Which brings us to this: how much you will love the concept behind this production of Godspell is dependent on a couple of things. Do you love Godspell so much you’d listen to it read the phone book? If your love of the musical is based solely in how much you love the gorgeous songs (and I can’t stress enough how beautifully sung this show is), that may be enough for you. Contrariwise, how much do you love SNL? How much do you miss Mary Katherine Gallagher? How expansive is your generosity for sketch comedy? While I think that this show is one that would repay, in no small measure, your attention based on the music alone, there are the sketches to get through, and that is something to keep in mind. 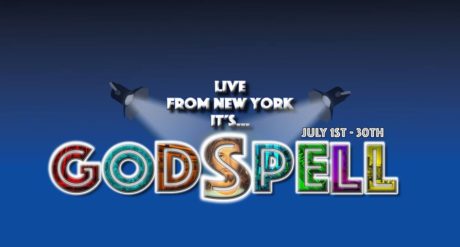 Godspell plays through July 30, 2017, at Infinity Theatre Company performing at The Children’s Theatre of Annapolis – 1661 Bay Head Road, in Annapolis, MD. Tickets are available at the door, or purchase them online.