I was able to interview gospel star Yolanda Adams and rock star Mark McGrath. Both were personable, gracious and engaging. Adams attributes her success to God and gratitude. She has performed at A Capitol Fourth about twelve times and loves it. She balances motherhood with an understanding that this is what she does, she sings.

Mark McGrath was a HIGHLIGHT! As Beach Boys’ singer and original member Mike Love said, “He sure has a lot of energy!!” McGrath was engaging and personable with everyone. He danced while smiling all over the stage, but then claimed he was nervous singing with The Beach Boys. His nervousness wasn’t apparent. He shared how the last golden age for making music was the 90s, but then streaming came in and record labels took a dive. McGrath is concerned with protecting musicians’ intellectual property and musicians just starting out. He shared that it was an honor and unreal to be singing in front of the Capitol. McGrath loves performing with Camp Freddy, which supports our wounded veterans. Visiting Walter Reed Hospital inspires him and he does all he can to support veterans. Before the interview was over he met a Marine spouse who gave him a special cloth star and he was clearly moved. He did two promos for the military and their families too.

The whole show is pure class and talent! It has something for every generation and for every type of music from Broadway, gospel, blues, R&B, country, top 40s, rock ‘n roll and classical.

Actor John Stamos debonairly hosted the whole event while also playing drums and guitar with The Beach Boys. He shared he has been playing drums with The Beach Boys for 30 years and it is a dream come true. He wishes his Greek immigrant grandfather could see him now. Billboard Magazine Gospel Artist of the last decade Yolanda Adams sang a rousing rendition of “God Bless America” and asked the audience to stand up and join her. Country star and Wounded Warrior Project/Red Cross spokesperson Trace Adkins sang in his gorgeous baritone voice surrounded by service members in their service uniforms.

The Beach Boys played a medley of hits including “Help Me Rhonda,” with support by Sugar Ray’s Mark McGrath and John Stamos, to the joys of the crowd. Stamos is donating his patriotic drum set specifically made for this show to a wounded marine after the show. The Four Tops wore white shiny sequined tuxes and sang their infectious medley of their hits including “Baby I Need Your Loving” while dancing in sync. Laura Osnes danced and sang a choreographed song “Yankee Doodle Dandy” with her male dancers on either side of her. Her dancers came out to the crowd several times during other performers’ set including Kellie Pickler’s and The Four Tops. Kellie Pickler sang two rousing songs and entered the crowd to embrace a young lady in a wheelchair. A very cool moment was seeing the real Blues Brothers – well, half of them – Dan Aykroyd and John Belushi’s brother, Jim Belushi. They wore their signature outfits and danced to “Soul Man” and others.

This is a top-rated show that should never be missed. 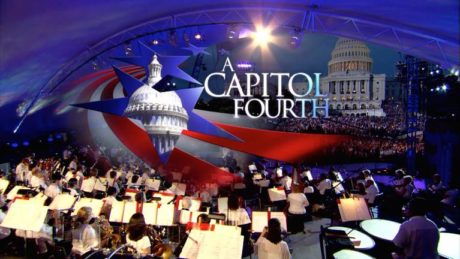 Watch a replay of A Capitol Fourth, which was broadcast live on PBS from the West Lawn of the U.S. Capitol on July 4, 2017.