This isn’t your normal poetry reading.

Those words, spoken by Creator and Director Caleb Beissert as he introduced the Asheville-based Poetry Cabaret Collective, could serve as the tagline for the show. The performance is decidedly different than a typically-staid poetry reading. 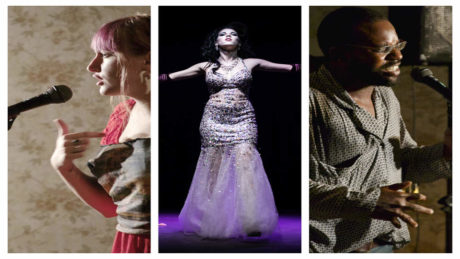 The small stage is sparse. A microphone stand is set in the middle, a piano in the corner. Old frayed hardcover books, a red curtain, and a hat rack are the only decorations, but those decorations are beside the point. This minimal approach to the staging is an unsubtle hint that this show rests on the talents of the performers, and the versatility of styles they bring.

The evening started with music. The show’s composer, talented multi-instrumentalist Aaron Price, started off with a rousing piano number that touched on a variety of different styles. Beissert then took the stage and read poems that verged from political to humorous, occasionally accompanied by Price on guitar or piano. Their collaboration was expertly-arranged, especially when Beissert read work he’d translated from the Spanish poet Frederico Garcia Lorca and Price accompanied him softly on guitar. The result was lovely.

Not all of the readings were accompanied by music, but none lacked style, either in content or approach. Justin William Evans delivered the most nakedly-political poem of the evening, an untitled screed aimed at Donald Trump. Kevin Barger, a retired slam poet and organizer, lightened the mood by asking the audience if they felt sexy before he started, then smoothly read his work. Michael Coyle’s voice was as hypnotic as the short poem he read, and Kevin Evans delivered one of the most-powerful performances of the night (again, joined by Price on piano).

For this run of shows, the Poetry Cabaret Collective is featuring D.C.-based poet, Teri Ellen Cross Davis. Ms. Davis gave a smooth reading with three short poems that revolved around femininity, Michael Fassbender, sexual desire, and Shakespeare. Adding her to the lineup was a shrewd move, not only because it involved someone local, but because Ms. Davis makes any collection stronger.

But poetry wasn’t the only art form featured that evening. Cellist Polly Panic delivered two dark performances that were simply spellbinding. Dressed in all-white and with a sense of insouciance, Ms. Panic resembled nothing less than a rebellious angel, and she played and sang like one as well. Her boyfriend, comedian Tom Scheve, did a quick standup set that went over well, and touched on their relationship and the history of this area.

It worked out well to have the poets each read once during the evening, but that same rule didn’t apply to Beissert. He read on three different occasions, and he’s a fine poet, but it would have been nice to hear more from the other artists. Hopefully the focus will shift from show to show, or there will be an established sense of balance. Similarly, musician Aaron Price is so talented, and his accompaniment so beautifully delivered, that it seemed a waste to not have him join more of the readings.

But those are quibbles. The performances were strong, the evening entertaining, and the Poetry Cabaret promises worthy surprises with every show.