Was ever a jailed sex offender more self-righteous and self-pitying than Rabbi Barry Freundel in this brilliantly disturbing new play by A. J. Campbell? Were ever such a predator’s’ victims—in Freundel’s case the women he surreptitiously photographed undressed for his own private spank bank—given more eloquent voice to state how he hurt and violated them, to call him on his shit? If ever there’s a play that better lays bare the inner life of a man of the cloth who prays and preys, it’s going to have to be measured against this hard-hitting script. 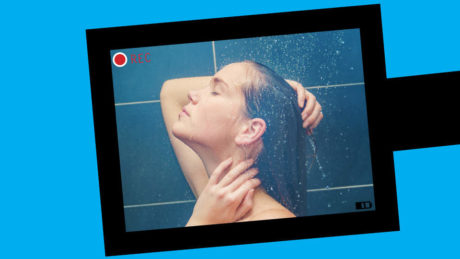 For those unfamiliar with the Freundel scandal, here’s a capsule summary from The Forward,   (“news that matters to American Jews”):

Before his arrest in 2014, Freundel was the longtime Rabbi of Kesher Israel in the Georgetown section of Washington, D.C., and an active member of the Rabbinical Council of America, an Orthodox rabbinic group.
Freundel is believed to have violated the privacy of at least 150 women, whom he filmed while they undressed and showered at the mikvah, or ritual bath, including members of his Orthodox synagogue, candidates for conversion to Judaism and students at Towson University in Maryland, where Freundel taught classes on religion and ethics. The rabbi also secretly filmed a domestic violence abuse victim in a safe house he had set up for her.

Even in a society near sated with reports of clergy abuse—which cuts across all faiths and  seems not to have abated—what Freundel did still shocks.  Playwright Campbell (who also produced) paid close attention to the scandal. As she writes in a program note,

I watched all the news coverage and read the court documents. What the Rabbi did by recording women in the bathroom was beyond comprehension. But there was no context or the story nor larger meaning to take away. [Constructive Fictions] was an attempt to frame the story so we understand the world he lived in.

Campbell’s canny solution is to set the play in the DC jail cell where Freundel is to this day serving time and to make him have to hear the accusations and testimonies of four women—all deeply devout Jews—who are composites of the many he abused over a period of five years. The uncredited set literally frames him, and it’s on rollers so it can be rotated by the women as they testify. The interior of the cell also functions as a pulpit during passages when Freundel changes from prison orange into rabbinic garb.  As directed by David Moretti, Constructive Fictions is an ingenious work of stagecraft.

Matty Griffiths as Freundel delivers a remarkably nuanced performance. Even as the Rabbi is vainly complaining of his circumstances, egoistically explaining his conduct, plaintively seeking exoneration without an ounce of empathy for those he violated, Griffiths achieves a persona and presence that allow us to see not just through the man but deep inside him. As embodied by Griffiths, Freundel is by no means a sympathetic character but he is a comprehensible and decidedly recognizable one.

As one woman pointedly says, “Men will risk anything to get what they want.”

As the story unfolds, Campbell’s script drops jaw-dropping details one after another. Freundel compares his behavior to that of Bill Clinton, General Petraeus, and John Edwards and grouses that he got jail time and they didn’t (!). He proudly mentions he once published an article about what’s wrong with pornography and regularly counseled couples whose marriages were damaged by the husband’s consumption of it (!). He justifies his mikveh-peeping as necessary surveillance, to make sure these women’s conversions to Judaism would be legit (!).

The four women are played by Anna Paliga as Rachel (a student less inclined to judgment than the others), Natasja Handy as Leah  (the youngest, a whose hurt and anger hurt to watch), Gianna Rapp as Rebecca (a woman in sorrow at the fact her Rabbi saw her naked before her betrothed did), and Helen Bard as Sarah (the oldest and wisest and in many ways the most grief-stricken).

In fairness, these four performances lacked the confidence and presence demanded by Campbell’s scathing script. However, there is a captioning system in the theater intended for the Deaf and hard of hearing. On occasions when a particular performance was not landing with as much gravitas as it might, I found myself watching as Campbell’s electric text scrolled by. And I would get chills.

Campell’s contextual framing of Freundel’s offenses turns on the notion that everyone tells useful lies. We can’t be who we really are otherwise. We create “constructive fictions” (hence the title) in order to be true to ourselves. The notion of the “useful illusion” has been a trope in theater for ages, and trotting out it here as Freundel’s self-defense may seem to make some sense…

But stay tuned to for the shocking and damning ending.

Constructive Fictions plays through July 23, 2017, at the Eastman Studio Theatre in the Elstad Annex of Gallaudet University – 800 Florida Avenue. NE, in Washington, DC. Some dates and times provide an ASL interpreter For tickets call Ovation Tix at (866) 811-4111, or purchase them online.