With a breezy “Hi, y’all!” Clyde Ensslin welcomes us to the complicated story of Thomas Jefferson and Sally Hemings, as told by none other than Big Bill Clinton himself. It’s a chance to relax, enjoy, and learn more about one of the most fascinating chapters in the history of our nation. 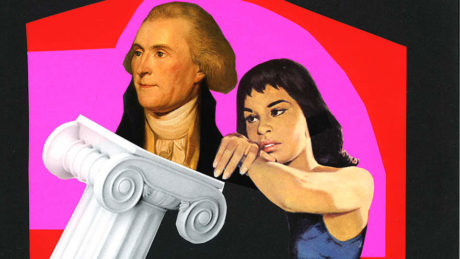 Sally Hemings, the enslaved woman who gave birth to at least six of Thomas Jefferson’s children, has been in the news again recently. When workmen at Monticello removed a men’s bathroom, her likely living quarters, a mere 14 feet 8 inches wide, and 13 feet long, were revealed. By next year Monticello plans to restore the room for visitors to view. Another aspect of Sally’s once-invisible life will come out of the shadows.

It is difficult to accept that the man who wrote “We hold these truths to be self-evident: that all men are created equal” had hundreds of slaves. The slave who bore his children was his late wife’s half-sister. He was affectionate to his white grandchildren, but not to Sally’s children.

What does this tell us about “The Sage of Monticello”? In The Hemingses of Monticello, scholar Annette Gordon-Reed notes that instead of freeing his slaves and honoring Sally and her children, “What he did instead was to bring down a curtain on his relations with Hemings and their children so heavy and thick that it took over a century and a half to effectively raise it.”

Ensslin’s carefully researched monologue traces the controversy from Jefferson’s day to the present. It is an engrossing journey. It has the feel of a lecture rather than a theater piece, but the richness of the material makes up for the lack of dramatic tension. Bill Clinton seems to disappear and reappear almost arbitrarily, and at times I thought the lecture was being given by Ensslin himself. But this is a thoughtful, amusing solo performance and well worth watching.