Caveat (written and directed by Ben Lockshin and playing at Gallaudet University’s Eastman Studio Theater) is a “One’s-a” show, where each character is an idea of a person more than an actual person. Of the people we’re introduced to in the cutthroat world of D.C. house-sharing, one’s a prig (“Anna,” played by Eva Coll), one’s a bartender from Portland (“Seattle,” Bethany Coan), one’s been through it all before (“Topeka,” Krystal Ramseur), one’s a white guy intentionally into yoga (“Trent,” Peter Narby), one’s a gay guy with a clipboard (“Charles,” Darnell Eaton), and one’s a frat boy named Carson who’s also a DJ (Emilio Hernandez). I should have trigger-warning’d that description, I know, but I didn’t. 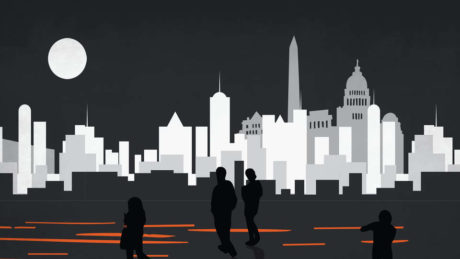 A blank stage, with little in the way of a set or props, allows the audience the opportunity to imagine the Internet, a living room, a bedroom, and a backyard space. It’s Our Town, set in D.C., not Grover’s Corner, but without Ghost Emily’s hopefulness. Against this backdrop, we’re going to watch four hopefuls beg and plead (and, in one case, writhe on a mattress) for the chance to house-share in a basement room with only a sliver of a window. The characters, though, remain tropes throughout. They’re not meant to exist, really; they’re there to be catalysts.

That the characters are stereotypes isn’t necessarily a bad thing – Caveat, at times, has the pacing of a sitcom, and that kind of speed sometimes needs to eschew, or isn’t even interested in, character development. The actors each get moments to shine, whether that’s Anna’s late-stage epiphany, Charles’s meltdown, or, at one point, Trent licks his arm, a move so baffling that I’ve decided to be charmed by it. And the play itself hints at some interesting questions about compromise. What parts of ourselves do we hide to sneak past the defenses of others? What’s the algebra of self-worth vs in-city low rent? And how gross is too gross when considering a bed in a furnished apartment? (Trick question, the answer is ALWAYS TOO GROSS.)

Lockshin’s script keeps the action moving, with some unexpectedly funny punchlines. It isn’t always strong at scene transitions, however; a weakness that comes across, sometimes, in how the actors deliver their lines and work in relation to each other. Some tightening of those breaks, and some more direction for the actors, would go a long way towards supporting the comedy that naturally comes through in set-ups like this one.