There is a moment in Sean Surla’s one-woman piece, Ghouls, where Emel Haddad – Surla’s stand-in for herself, and an extraordinarily generous actress – describes driving to the top of Pike’s Peak with her family. Along the way, before the very top, she wants her mother to stop the car, to revel in the experience of being in the middle of clouds. Her mother, though, breaks the spell, revealing the trick masquerading as truth: the middle of clouds are nothing but fog. It’s the perspective of distance that gives them shape. 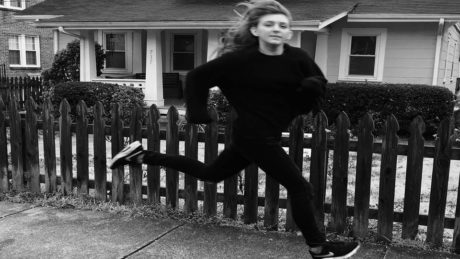 Ghouls is an expansive memory play, where Surla allows her nostalgia free rein. What starts as a children’s game of tag involving ghouls, zombies, and humans, turns to first loves, stolen girlfriends (her brother swoops in like clockwork, stealing crushes in that easy way straight boys have about them), meditations on moving, insights about desire.

For an hour, Haddad, as “Sean Surla,” holds our attention and commands the stage. She is immediately engaging and vulnerable, intelligent and curious. Solo shows are super risky; if it’s terrible, it’s going to be solidly terrible for the duration. (The Mike Daisy Effect, one might call it, for personal reasons.) Fortunately for Fringe-goers, the compassion in Surla’s script is matched with a talented actor in Haddad.

Theater is a magical space, and this script isn’t biography – and it shouldn’t be. It’s a spell Surla casts to grant herself forgiveness, understanding, reflection, and peace. If it ranges sometimes farther out than it needs to – and the script itself could benefit from some editing, tightening – it’s only because moments like that one, in the clouds near the top of Pike’s Peak, need breathing room to be found.