Large swatches of fabric move time forward or weave through space. The bold colors catch the eye. Confrontational dialogue sets characters in opposition while bodies remain static or surge forward with pedestrian-like purpose. We hear familiar phrases and grasp for a glimpse of a connection, but it is momentary and fleeting. 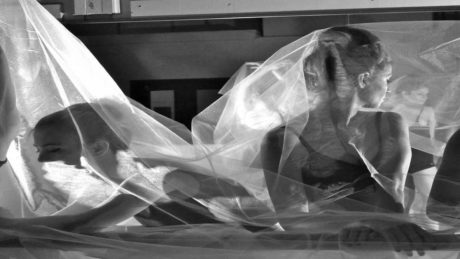 Director and Playwright Ivan Faute has developed Life, Death & Everything In-Between as an experience of the moment. The cast takes on the vast subject of portraying life stages in resonant relationships such as mother-daughter, husband-wife. It is life from inception to old age, starting with a male figure enshrouded in fabric, representing a product of creative determination, to a card game between four aging friends that easily sways with inclusion and laughter.

The actors Joe Tapia, Krystal Hurr, Nitya Kalidindi, Sydney Jones are framed by familiar phrases. Over the progression, the four take on diverse roles and relationships, being mother to a daughter, a friend to a friend, and a wife to a wife, changing the balance in each scene. The dialogue continues to push forward quickly. Without pause to listen, the bodies lack presence but when the pause settles in, there are notable moments of recognition. Movement often isolates, but a scene with the four hovering over one another suggests the give-and-take of musical chairs. Choreographer Suzanne Wiltgen’s minimal movement draws the actors to props like colorful umbrellas and the large fabric which is cocoon, nest, divider or a deterrent.

The manipulation of the fabric is eye-catching and if more fully realized could step to empower or quicken transition. Composers Eric Reda and Kelly Rossum provide a cushion of sound, mixing jazz and improvisations with solid effects that set time and place.

Life, Death & Everything In-Between is ambitious in taking on wide territory. It is a noteworthy effort with skilled performers and directors. By honing in on tiny moments and gestures of connection, there could be more to grasp while casting that huge, huge net.