The success of any production of Steven Sater and Duncan Sheik’s Spring Awakening rests on the ability to find harmony between the two dichotomous elements of setting and song. The musical is set in Germany in the 1890’s, and yet the score is rock and pop influenced throughout. Fortunately, Director Jillian Lochlear Bauersfeld and Musical Director Michael W. Tan have this well under control in their current production of Spring Awakening at Spotlighters Theatre in downtown Baltimore.

Spotlighters Theatre is an intimate venue that works perfectly for a cozy and confessional show like Spring Awakening. Staged in the round, Bauersfeld uses every bit of space provided, even moving beyond the central platform to utilize the corner areas of the black box. Equally as impressive is the choreography by Amie Morrow Bell. At times – as with the more spiritual moments – the movement is elegant in its simplicity, but the larger group numbers appear suitably complex without becoming clumsy. The costumes of Amy Rawe Weimer also persuasively straddle the delicate line between period and modern.

Spring Awakening is the story of the dangers shaped when adults attempt to deny children the knowledge necessary to navigate the adult world. To bring this to life, a youthful cast is required and Spotlighters delivers. At the core of the show are Wendla Bergmann and Melchior Gabor – two teens at a crossroad in their lives. Here, Wendla is brought to life by Allison Comotto, who skillfully negotiates the balance between Wendla’s innocence and the burgeoning sexuality that is going to cause her such strife. Possessing a lovely singing voice, Comotto commands attention when she is on stage. As the other half of this couple, Sean Dynan convincingly crafts Melchior as an adolescent on the cusp between childhood and manhood. Dynan’s singing voice can be both tender and powerful depending on the needs of the contemporary score. “Left Behind” a song Melchoir carries in the second act is beautifully sung and the scene surrounding it is touchingly directed, making it one of many highlights during this evening of theater.

The chemistry between Comotto and Dynan is palpable right from “Touch Me,” the song in which they first begin to understand their blossoming attraction toward each other through to the seduction scene that closes the first act. That pivotal moment, in particular, is staged and acted with grace. Here audiences see how quickly innocent exploring can shift to primal urges with little thought or understanding of the consequences. Neither Comotto nor Dynan shy away from the emotional exposure necessary in this raw and vulnerable scene.

The ensemble of actresses who portray Wendla’s friends each shine individually but also blend as a group. Alyssa Bell, Ana Johns, Rachel Verhaaren, and Ellen Manuel commit fully to the group numbers and infuse each of the girls with personality. In particular, Martha excels with her dramatic acting during a pivotal scene for her tragic character. And with one of the strongest vocal performances of the evening, Ellen Manuel not only elicits sympathy for the character of Ilse – the young hippie free spirit who seems to have escaped the oppression of society only to fall prey to other dilemmas – but she also gets a nice moment to show off her guitar playing skills.

The male ensemble makes for a perfect counterpoint to that of the young women. Brendan Hale, Aaron Hancock, Chris Weaver, and John Endres strive for, and nail, individuality. Especially in their opening group number – “The Bitch of Living” – they immediately clue the audience into each character’s specific traits and desires, which makes watching them navigate those challenges throughout the night all the more rewarding.

This brings us to the most complex youth character in Spring Awakening. Moritz Stiefel is the rebellious, yet insecure, member of the boy’s school class. As portrayed by Jim Baxter, Moritz’s anxiety manifests in physical twitches that are so realistic that they become a core part of who this character is. At times, it makes the audience believe that Moritz lies somewhere on the autism spectrum – an idea that seems all too plausibly given the boy’s troubles in school and with interpersonal relationships. Baxter also possesses the necessary rock-edged vocal stylings required for this character. Audiences can feel the pain of this young man through both Baxter’s acting and singing moments. 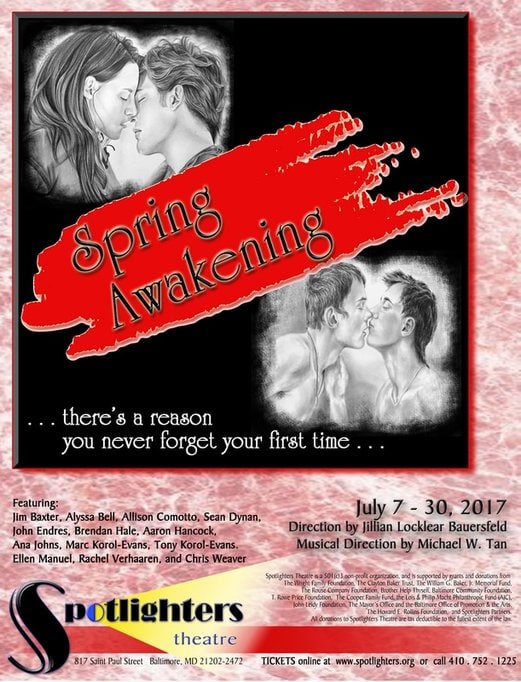 Spring Awakening is a heavy show. The topics covered are complex and in many cases depressing. And yet, the show never feels like a chore. In this smaller theater, where audiences are extremely close to the performers on all sides, it is easy to get caught up in the emotions of the show, but there are lighter moments that help to keep things in balance. A late-in-the-show musical number called “Totally F**ked” provides a much-needed release of pent-up energy. The pit musicians – Michael W. Tan, William Georg, John C. Jeffries, and Greg Bell – who have done yeoman’s work all evening really get to let loose on this powerful song. The lighting design, by Laurie Brandon and Terry Brandon, sets the needed atmosphere for this musical number, as it has done throughout the entire evening.

Perfect for fans of modern rock musicals, Spring Awakening, as presented at Spotlighters Theatre, is a rewarding viewing experience. Like the shadows of trees that adorn the painted stage, viewers will understand the spectre that hovers over a society unwilling to educate its youth about sexuality and the risks involved. In many ways, the more things change, the more they stay the same.