Tiresias’ Tits is a self-described satirical, surreal, burlesque (fun fact – the author of the ur-source material, The Breasts of Tiresias, Guillaume Apollinaire, is responsible for giving us the word “surrealism”) and it lives up to every single one of those words. Tits was morphed into its present burly-incarnation by Rebecca Rose Vassy, who performs under the name Diva Darling and plays Therese/Tiresias, and it is directed by Sean Butler, the co-founders of Eclectic Mayhem Productions. Surrealism poses challenges for any reviewer, logic of the plot is associative and referential and resists summarization, (kind of a theme of the show itself, actually). The basic landscape of the story is that a frustrated housewife, Therese, has had it with her bacon-loving husband (Buster Britches) and decides, just like that, to become a man in protest and the rest kind of follows from there. Rose Vassy has her finger on the pulse of our times and protest in its many forms (especially those seen in the time of the Women’s March), exploring the back and forth between the thrill of protest, newly lodged in the breasts of many a bourgeois, and the need for much more concrete follow through in the fight against gender inequality and the never ending fight against the depredations of gentrification. These ideas are all slammed together and in the wash and wrung out, while every now and then someone takes (almost) all their clothes off. 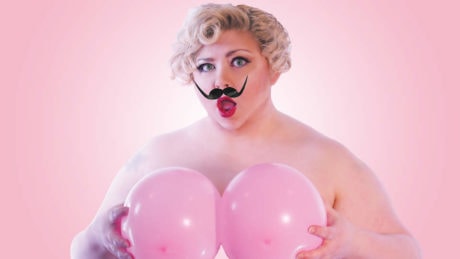 While Tiresias’ Tits is a burlesque that flashes plenty of skin, the show opens with a prologue, ostensibly delivered by the Director of the show, played by Short Staxx (Eclectic has chosen to identify performers by their burlesque monikers). Staxx delivers an impassioned monologue explaining in poetic terms why this play exists and what it is meant to accomplish and how it would do so. It is a rousing speech delivered with aplomb by Staxx, urging all of us in the audience to become like stars and “be the flame of the new day.” Following Apollinaire’s original meta practice, Rose Vassy infuses many more delightful touches of self-reference and reflection to the proceedings, shooting off beams of light and reflecting and refracting them back into our eyes again and again, a hyper local echo chamber of hilarity, nudity, protest, and social justice. She also created the character of Apolla, not present in the original play and played here by Boneza Valdez Hanchock, a strong black woman whose potent presence shows that meta awareness can be used for more than present laughter. Tiresias’ Tits is a burlesque that delivers titillation and laughs in spades but it is also not short on inspiration.

Hopefully, all of the performances will have burlesque fans and aficionados in attendance because; it makes the experience so delightful when a critical mass of the audience know the rules. Social Media, an ever-present character played with scene stealing snark by Alexandra Wehr, will walk you through the ins and outs of when to hoot and holler, just in case though. The collision of costume and choreography is especially crucial when the clothes have to come off. Costume Designer Carrie Smith and Choreographers Diva Darling, Cherie Sweetbottom, and Buster Britches work wonderfully together to give us the many whimsical sight gags and choreographic and costume delights of Tiresias’ Tits. Sean Butler, who served as Fight Choreographer, as well as Director, dials up the physical slapstick with a hearty helping of hard-boiled gender queer buffoonery, (Buster Britches and Cherie Smartbottom do exceptional work on this front). The many slides projected onto the cyc (designed by Rebecca Rose Vassy and Sean Butler) are well composed and stuffed with textual jokes and visual gags, though sadly some of those were only visible when the stage darkened for the scene transitions – in a fight between incandescent stage light and a lone DLP projector, the projector loses. It was a nice touch to project a QR code to the full program during pre-show, which saved more than a few trees, I’m sure.

Presented in the spacious Lang Theater at the Atlas Performing Arts center, Tiresias’ Tits‘ personality is bigger even than that accommodating room, whose technical elements could not quite match the verve and spirit that Eclectic Mayhem Productions was bringing to the room. Chalk a lot of that mismatch between aim and execution (live color scroll moves abound in the lighting and a projector that is about 7000 lumens too dim to bust through stagelight) to the whirlwind of Fringe. I would love to see this show again when they have the time and the treasure to match the technical elements to their flashy, genderqueer, protesting ends. Such quibbles aside, it is nearly impossible, especially if there is a shred of progressive political instinct in the audience, not to enjoy Tiresias’ Tits and its surreal presentation of the struggle to break free of the way things are and just make them, and ourselves, better.