Now playing at the Kentland’s Arts Barn, Dial ‘M’ For Murder by the Sandy Spring Theatre Group has a lot to offer those who enjoy a mystery-thriller. First of all, it’s a really good play (that always helps) and then it is well presented with actors convincing in their roles. 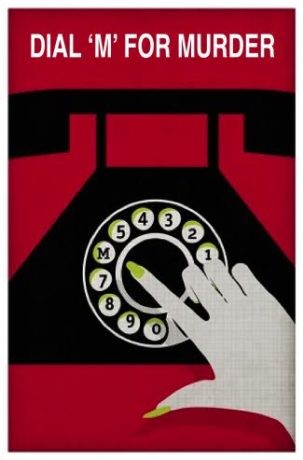 The story is set in 1950’s London and I was glad to see that Director and Set Designer David Levin keeps the period feel without overdoing it. The subtle ‘noir’ background music by Nick Sampson supports this. The set itself is minimal but accurate to the time; the props (particularly one which must have been hard to find…you’ll know it when you see it) provided by Melissa Esposito, Ginger White & Evelyn Renshaw and the costumes by Laura Andruski blended right in and added authenticity. Master Carpenter Mark Ludder’s clever set work becomes apparent as the story progresses.

The story evolves around Tony & Margot Wendice (Ted Culler and Tracy Husted), their visitor Max Halliday (Mark Steimer), and Tony’s plot to kill Margot, mostly for her money but also possibly revenge for her previous affair with Max. There are plot twists galore but they flow naturally from the action and are not contrived.

There is a chemistry between Margot and Max, now ‘just friends’ that makes you sympathize with Tony when he enters the room and sees them together talking…you know he knows! Special mention to Tracy Husted. In addition to her incredible acting skills, she has a charming voice and nailed the British accent.

Tony’s scenes with Lesgate (Eric Henry), a man with whom he enters into a sinister partnership, give us insight into how devious Tony is and how desperate. He’s been planning his move for a long time. The reluctant Lesgate is pressured into agreeing to co-operate with Tony. Their scenes together showed a lot of tension and really moved the plot along.

The result of Tony’s planning isn’t what he expects and he has to constantly try to stay ahead of Chief Inspector Hubbard (Mark Shullenbarger) investigating the case. The Chief is a commanding presence and when he’s onstage dominates the action. This is not a policeman you would care to have investigate you! A little light relief is provided by Officer Thompson (Omar LaTiri) in a brief but memorable appearance.

There is not a lot of real fast moving action in this play, so the use of lighting (by Joe Connor), and off-stage sound (Omar LaTiri) is important as is the ability of the cast (and stage manager Jerry Callistein) to keep things moving and not become static. All did a great job and there really wasn’t a dull moment.

Opening night had a few (very few and very minor) glitches covered up well by the cast and crew but all in all nothing that detracted from the play. I did have a little trouble hearing Mark Steimer in the first act; his character is low-key but his voice was a little too low-key. However, his performance in the second act was spot-on.

If you are looking for an evening’s entertainment that holds your attention without showing you explicit violence and gives your brain a little workout, this is a jolly good show!

Running Time: Two hours and 20 minutes, including one 15-minute intermission.

Author Bio: Robin Lynch is a longtime Kentlands resident and has had a career as a professional kitchen designer. Now retired, she is active in animal rescue (saving kitties), and enjoys reading, watching old movies, and going to plays.