Sitting outdoors is probably the best venue to watch Shakespeare, and watching a production in July of his classic comedy A Midsummers Night’s Dream under the direction of Tom Delise is the ultimate environment for enjoying the Bard on a warm, well, midsummer night. The Baltimore Shakespeare Factory’s goal is to recreate, as closely as possible, the staging, spirit, and atmosphere of Shakespeare’s own original company. This production is probably very close to those productions in Elizabethan England. I felt like a groundling on my blanket right next to the stage. The action moves quickly. The lines are clearly spoken and the plot, although it seems convoluted, is easy to follow.

The play is one of best-known comedies in the world. It has all the great elements of a great Shakespearean play, star-crossed lovers, fairies, clowns, and magic. Titania, Bottom, and Puck are roles actors dream of playing. The BSF is up to the task. Even the minor roles have strong performances.

Fred Fletcher-Jackson as Lysander, Liz Galuardi as Hermia, Davon Harris as Demetrius, and Micaela Mannix as Helen are outstanding as the four young lovers whose lives are turned upside down by fairies. The two men now both smitten with the bewildered Helena fawn at her feet. This leads to a grand cat fight between Helena and Hermia. The four actors create a hysterical and perfectly staged scene. Having Puck (Allie Press) sitting in the audience enjoying the mortals battle is just the right touch. The timing was impeccable.

Valerie Dowdle is a sultry Titania.  Her attraction to poor Bottom (Shaquille Stewart) in his magically morphed state as a donkey is made more comical by her sexuality. Dowdle plays a dual role as the more refined love of Theseus (Elijah Moreland), Hippolyta, and does well making the change. Moreland also plays the conniving fairy king, Oberon. He also fills both roles well. I really enjoyed his comments during the play within a play. I also think sitting the actors who are also watching the play within a play in the real audience is inspired.

However, Bottom is probably the most memorable role. Stewart eats the scenery (Actually, there is really very little scenery or set) as he goes from self-serving mortal to beloved donkey to unsure actor. The pinnacle of this production is Bottom’s death scene in the play within a play. Bottom was one of the first working class characters in a major role. He is  probably the prototype for Ralph Kramden in the Honeymooners or Doug Hefferman in the King of Queens. Stewart delivers a wonderfully broad performance as expertly performed as anyone could hope. He never lets a chance for a laugh go by.

Allie Press is the quintessential Puck. She is mischievous and lithe. She expertly mingles among the audience. She never steals attention from the actors as she watches, but adds to the humor.

The supporting cast includes Cheryl J. Campo (Snug/First Fairy/Moth), Kathryne Daniels (Peter Quince), Tess Garrett (Egeus/Snout/Mustardseed), Jeff Miller (Flute/Peaseblossom), and Tegan Williams (Starveling/Cobweb). They reach their full stride during the play within a play. Lead by Stewart as Bottom playing Pyramus, Miller as the cross-dressing Flute, now the fair Thisby, Campo now a not very scary roaring lion, Williams as the Moonlight and Garret as the Wall are perfectly wonderful playing awful actors. Daniels as the playwright, Quince, should be watched during all this as her facial expressions are as funny as the slapstick on stage.

As stated, Delise knows how to present Shakespeare. He keeps the pace going, the dialogue flowing, and the laughs coming.

Jessica Behar’s costumes convey both the Hellenistic Greek times and Elizabethan times. Her fairies, especially Titania, have an ephemeral quality.  A nod goes to Assistant Director Marshall B. Garret, Dramaturg Jessica Clark May, Music Director Jamie Horrell, Choreographer Tegan Williams, and Stage Manager Rachel Tilley for helping make this a memorable production. When Shakespeare starts with the song “Love Potion #9,” you know you are in for a unique event.

So, grab your beach chair or blanket and catch some of the fairy dust on the lawn of the Meadow. You will definitely enjoy a magical night watching this wonderful play Shakespeare left for all of us to enjoy. For those who may not want to sit outside, it will be playing indoors for one weekend at the Great Hall Theater at St. Mary’s Community Center July 28-30. 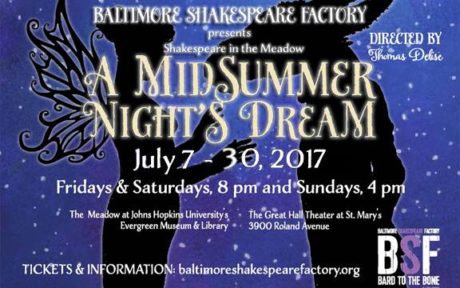 A Midsummers Night’s Dream plays through July 30, 2017, at Baltimore Shakespeare Factory performing at the Meadow at Johns Hopkins Evergreen Museum and Library – 4545 North Charles Street, in Baltimore, MD. For tickets, purchase them online.