Exit, Pursued by a Bear, produced by Barabbas Theatre for their 2017 CapFringe entry and directed by Kevin O’Connell, is a welcome DC introduction to Lauren Gunderson’s pithy, ratatat meta riff on Shakespearean themes of revenge washed through the modern understanding of the psychological horrors of domestic abuse. Gunderson begins with one of Shakespeare’s most famous stage directions, ripped from The Winter’s Tale, as we are reminded by a slide at the top of this production: “Exit, pursued by a bear.”

Gunderson then conjures up a different scenario of a controlling man, one much more common to our, and probably every, time. Nan is the long-suffering wife of the abusive Kyle, but Nan has had an epiphany and Kyle begins the play duct-taped to his recliner. What follows is Nan’s attempt to create a performance, a play within a play (some famous dude did that a lot, what was his name . . . ), that will make Kyle understand who he really is. Nan is assisted in her re-telling of her relationship with husband by her scene partner, Sweetheart, a sometime stripper and full-time dreamer, who plays Kyle in Nan’s re-enactments. When we learn that Kyle has crashed Nan’s planned getaway vehicle, she enlists her cheerleader best friend Simon to participate in the proceedings and to help her tell the story of herself. 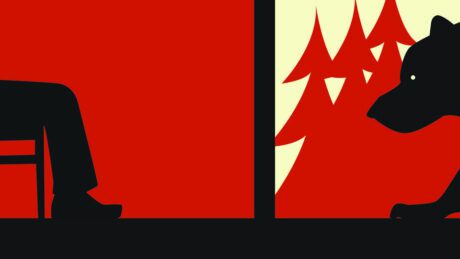 Exit, Pursued by a Bear does not come with a trigger warning, but the show’s depiction of the dynamics of domestic abuse could be harrowing for the uninitiated. Katrina Clark plays Nan with a profound blend of injury and anger that more than explains Nan’s flip flops between utter conviction in her mission and profound doubt about the necessity of her, admittedly drastic, plans. This is entirely believable, especially in the extended sequences when abuser Kyle, played with exactly the right degree of self-deluded charm by Devon Richard Ross, turns on the niceness and begs for mercy and his life and just one more chance.

In different hands, this dynamic could prove deadly dull or preachy, but Gunderson’s script often moves at warp speed delighting us with its sharp wit while subtly laying the groundwork before getting into the heavy stuff in the final third of the play. Moriamo Akibu’s Sweetheart provides sincere levity and expert grade snark while Reginald Richards’ Simon provides the grounded sass that keeps the play from floating away into fantasy and conjecture. Nan has great friends, old and new, and she is not alone in kicking against the pricks of this toxic relationship which threatens to destroy her (and so many other women). The entire company feels the rhythms of the play well, keeping up with the whipsmart sections and providing plenty of depth when the play turns on itself to plumb the emotional cycles caused by the gravitational pull that are so often a central part of these toxic relationships.

Lab II is an intimate setting well matched to this particular drama. Kevin O’Connell makes excellent use of the space and the few props hanging around (though Exit has more than most Fringe shows). Every piece works. The pace and space of creating moments where actors become audience and players in quick succession all while playing to and through the fourth wall is very effective. The sound design (Kevin O’Connell) and the projection design (Teri Gillmor), especially the stage direction as super-titles, are used to great effect to assist in creating a tension between maintaining and breaking the fourth wall.

I don’t know if Gunderson indicates that the play’s stage directions should be projected for the audience, but it is a great choice in a black box like Lab II under Fringe conditions where only the broadest strokes and suggestions of sets are possible. Gunderson’s stage directions are often evocative and fun (I dare you not to laugh when the play tells Sweetheart to build a meat wall). The black levels of this particular projector have been dialed up to eleven and so there are no true blackouts, despite what the super-titles say. This creates a massively effective silhouetting of the actors against the back “wall” (it’s actually a curtain) of the theater which feels like a profound choice rather than a distracting reveal of the necessary business of preparing for the next scene.

Capital Fringe is often an excellent place to explore completely original work, but it is also an excellent space to take up a fantastic work like Lauren Gunderson’s Exit, Pursued by a Bear that just hasn’t been produced in DC yet. Barabbas Theatre deserves massive kudos for picking this show, which is one among many exploring what modern feminism means against the backdrop of this particular President. Kevin O’Connell has assembled a deft cast with an excellent feel for this riveting, harrowing, and hilarious show that everyone should absolutely see.