Willie Carlisle is an astonishing performer, and if I were only reviewing his performance of mountain folk music, I’d recommend this show with the entirety of my full heart. Guitar, banjo, squeeze box, and fiddle: Carlisle brings each instrument to life as they accompany a rustic voice that catches in the right places on songs like “She’ll Never Be Mine,” and the heartbreaking “Ballad of Penny Evans.” 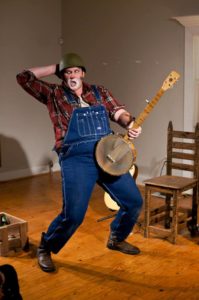 The thing is, there’s a show built around these performances, and it’s a lot to ask you to sit through that part just to hear some amazing music.

Carlisle’s There Ain’t No More is the story of a folk singer. We meet him as an old man, in his twilight years, where men of that age grant themselves permission to say anything. Carlisle inhabits this character thoroughly (and creepily, in a half-mask that is as upsetting as it is useful), and it’s too bad the 60 minutes of this performance aren’t just Carlisle in a creepy half-mask as The Folk Singer, telling us his life story. That would honestly be plenty. It would be enough.

But there are flashbacks. (Even after the old Folk Singer promised there wouldn’t be, so, fool me once on that, I guess.) And the flashbacks are accompanied by changes in lighting and demeanor — but without any sense of coherence. At some points, the old Folk Singer is a young Folk Singer and there’s a woman named Ruth? Other times the young Folk Singer is a Vietnam Folk Singer, but with the face paint of Emmett Kelly. A lot happens, I can assure you, because I watched Carlisle jump, stomp, dance, and fiddle his way around the room. But I can’t really explain to you what happens. A boy dies from hunger. Ruth gets an abortion. Someone gets directions to a mountain. A folk singer dies. But the why and the when of any of this is lost in an antic jumble that I am sure makes perfect sense to Carlisle. But it doesn’t translate to the audience. We’re left out of a lot. And in a piece that is in some ways a chance for the Folk Singer to justify the ways of folk to men, that is a serious missed opportunity.

What saves the show, though, is the music, and Carlisle’s tremendous charisma. While there isn’t much sense to what’s happening, he’s extraordinarily watchable – and, more importantly, listenable — doing it. His command of the material is entirely manifest in the confidence of his presentation; my wish was that there was more coherence in how he conveyed it.