Over the 65-minute run time of Caroline Bennett’s Garbage Person Karaoke, there are moments of painful comedy and bitter emotional connections with that specific kind of heartbreak that kicks the recently dumped. Those moments just don’t always connect with each other, and instead end up drawing attention to what’s lacking in the piece as a whole. 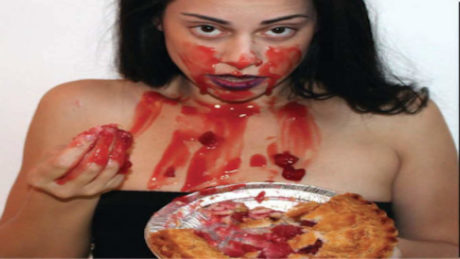 Three women — Dani Martineck, Izzy Schiller, Courtney McClellan – play various personas of the Garbage Person, who has just been loudly and abusively dumped by her boyfriend. As it says on the tin: she’s in a pile of garbage (and we’re in the basement of a boutique – so circles within circles of heavy-handed symbolism), and we’re going to spend the next hour wallowing with her.

Some of that unpleasantness is, of course, a feature, not a bug, of Bennett’s script. Getting dumped is the worst (I was once dumped by a guy I wasn’t even dating), and healing from that is going to take time. The Garbage Person’s attempts at grappling with how she is identified in the relationship (effed-up, lazy, uninspired, and, this must be drawn from some personal experience of the playwright’s, unstylish) are often affecting, but then they’re undercut by weird moments like someone smearing a pie all over her chest. Again, yes, I know, it’s called Garbage Person Karaoke and so maybe one expects pie-smearing. YMMV. How much one loves a show like this will depend a lot on how much patience and generosity one arrives with.

Part of the Garbage Person’s healing process is competitive karaoke, something the audience is assured is an actual thing but I live in the suburbs and am halfway through 40 so I’ll trust young people on this one and assume there are no more Moose Lodges for people to join. For a show with the word “karaoke” in it, there’s very little singing; and for a show with competitive karaoke as a plot point, it doesn’t feature as strongly as you’d imagine. It points to the lack of coherence in the script, and, frustratingly, suggests that there actually is a great germ of an idea buried within: so much about healing after a devastating romantic loss is faking it to make it; and what is karaoke but faking it to someone else’s song?

Instead, though, Bennett tries to bind too many different scenarios together, never really exploring any thoroughly. A therapy scene (between Martineck as the therapist and McClellan as the Garbage Person in this vignette) starts out strong, especially highlighting McClellan’s solid comedy chops, but ends with her just screaming about penises for longer than you’d think someone could scream about them. In a separate monologue, Schiller is the Garbage Person who smears the pie, in a send-up of 1950s relationship ideology, but nothing much is done with it and I’m still mad about the pie. The scene that worked best – but maybe should have been its own separate show – is when Martineck, as the Garbage Person, scrolls through a dating app with a name I think I’m not allowed to use here but it’s gross. And very funny.

Fringe is a testing ground for ideas – and there are some great ones in Bennett’s script to explore. Grounding the Garbage Person’s story more in the abusive relationship (at no point during the therapy scene, for instance, does the therapist mention partner abuse, or offer the Garbage Person any resources for dealing with that kind of trauma; instead, it’s a lot of pastel-colored pabulum about breathing and feeling where the pain is), if that is something Bennett wants to work out dramatically in a script like this, would go a long way towards giving the ending more of an emotional pop. And figuring out ways to work more karaoke into the show, too, can only make it stronger.