Internet addiction is no laughing matter.

However, for the talented team now lighting up the stage at the Sprenger Theatre at Atlas, the Internet–and all the craziness it has produced–is the stuff of which jokes are made. 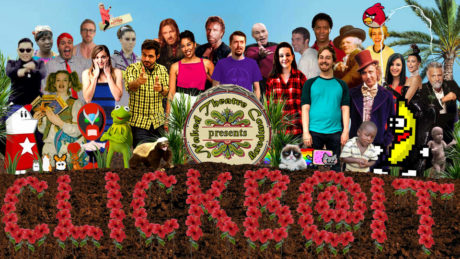 In fact, this addiction – which has millions of otherwise normal people madly clicking away on their mobile devices – is the premise for ClickB@it, a spoof on social media and the sometimes sinister (though mostly stupid) forces that lie behind it.

It’s also a wonderful excuse for some of the silliest laugh-out-loud lines around. Cory Cunningham, one of the founders of the Naked Theatre Company, kicks off this comedy revue with a spirited reading of apps, written on what appears to be an endless roll of shelf paper. (If you thought Twitter and Facebook were the only players, think again.)

Jared Mason Murray, the second in the trio of founders, does a truly hysterical imitation of cat videos, while Tanya Chattman makes a nifty pseudo-drill sergeant.

One of the funniest sketches in this comic arsenal is a Star Wars type battle between Internet titans. There are also witty take-offs on advertising apps, such as tips on caring for your avocado, and a spoof on data mining, complete with canary.

My favorite, though, is a spoof of a sombre 12-step program, complete with recovering addicts announcing how many weeks or days it’s been since their last clicks.

Christine Jacobs, Ben Ribler and Meredith Richard round out the lively ensemble cast, while Rachael Murray, the third of the company’s founders, is the creator of the concept for the show.

The skits move along briskly, with members of the team coming and going from both side of the stage, thanks to Cris Thenberg-Marshall, the stage manager, Kevin Place and Rachael Murray, the co-directors, and Quoc Tran, whose lighting bookends the acts. Sound Designer Jordana Abrenica does an especially notable job, piping in bits of ‘Swan Lake’ and ‘Carmina Burana’ at the silliest moments.

Click-on ball point pens are distributed at the beginning of each performance, so that audience members can participate without actually clicking or texting on their iPhones.

It’s all good fun, especially for those who are under 25 or just didn’t realize how funny the digital world could be.