Dancing Through Life…By the Way is a one-man show starring Christopher Bennett. No director is credited in the Playbill, but it appears that Mr. Bennett did the majority of the heavy lifting here. He was supported by Ray Azucena, Jan Austin, Ulrich Norbisrath, and Jayden Reed. More a synthesis of storytelling and busting a move than a “comedy” as it’s billed, Chris’ autobiography takes the audience on a journey from his childhood in South Carolina some 50+ years ago, to present day, weaving in songs like “Tossing and Turning” by Bobby Lewis, “Let’s Get It Started” by the Black Eyed Peas and “My Shot” from the musical, Hamilton. 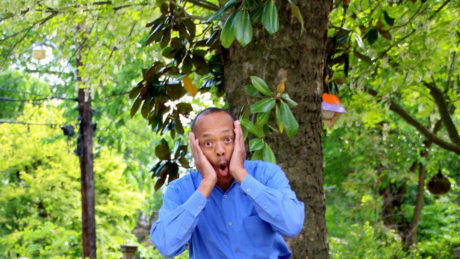 In this piece, Chris does it all. He tells his life story. He breaks up the story by showing photos of his family, video of people from thousands of miles away breaking out in dance, and even a music video or two. He pauses briefly at different periods of his life to look at the “data” and compare if his inner “nerd” is winning out in his life or if his inner “dancer” is.

If it sounds like an amalgamation of a lot of different things that could be hard to follow, then you’re right. The idea here is strong: look back on your life, tell meaningful stories and life lessons, and then weave in the dances that were popular during that time period and personally meaningful to you. But here is where things get a little fuzzy. The show starts off top heavy with long stories about his childhood and teen years and then it speeds up rapidly where he touches on a failed marriage or two, children, moves, and a career while also trying to integrate videos and an interview of apparent strangers who also enjoy dance. At times it was difficult to understand what journey we were going on.

Let’s be clear: Chris is an incredibly joyful dancer. If you like R&B and pop music of the last 40 years, you’ll enjoy this trip down memory lane. My biggest beef with the show is that the arc of the story does not feel consistent and there are a couple of technical issues that would be easy to fix. Turn up the mic when Chris talks over the music. The audience lost what he was saying. And invite videographers to a rehearsal instead of a performance (or at least make sure they don’t block the reviewer’s view of the performance.) With three videographers hovering about the playing space I genuinely questioned if they were in the show or just recording it for posterity. Distracting.

Christopher Bennett is inspiring. He came from a fatherless home, overcame adversity, was the first in his family to get a degree, and has experienced great success in many areas of his life. It’s clear his approach to life is to rise up. He is resilient. He’s no victim. If the purpose of theater is to connect with people and remind them of the beauty of the human experience, then Dancing Through Life…By the Way succeeds.