Four black men in their forties sit around a chess game in Dupont Circle park in 1980. They open the show singing barbershop-quartet style, an upbeat song about themselves: They are the 1342 Dupont Circle Heroes. (“White folks pretended we didn’t exist so we started calling ourselves Heroes.”) They’ve been friends for more than 20 years, since before the area was gentrified. Their elaborate handshake seals their longtime bond. And the story the play subsequently tells—of what happened between 1960 and 1980—is a stunner. In one brief hour, The Heroes’ Tale by Cheryl Butler-Poole weaves themes of race hate and sexual assault into a gripping narrative of love, loyalty, betrayal, and the longing to know one’s roots. Directed by her husband, Gregory Poole, the show features some of the most arresting acting you’re likely to see in Fringe. 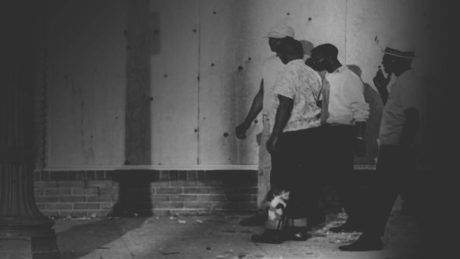 I’ll give away one plot point and no more, because the way the tale unfolds—its structure, moving back and forth between 1960 and 1980, revelation by revelation, from point of view to point of view—is an important reason the play has such power.

Twenty years ago, three of the Heroes were convicted of raping a white woman, and they spent ten years in prison for the crime. They didn’t do it. They don’t just say they didn’t; they really didn’t. But who did do it, and with what consequences for whom, left me breathless by the end.

Even to say too much about how the characters are related would spoil the suspense.

Thyme (Autumn Butler) is a young woman who is both a character in the story and a witness to it.  She observes everything, from a stool upstage. And just when the Heroes’ male-male banter gets a bit much, she steps through the fourth wall and lets us know what she’s feeling.

There’s a woman we first meet in a 1960 park scene as a hippie, singing “Scarborough Fair” (Dena Colvin). She will name her daughter Thyme.

This GroundWorksEntertainment production comes to Fringe having been staged elsewhere over several years, which is likely why all the performances are so assured and all the characters so lived in.

Lighting Designer India Soodoo, Sound Technician Dakota Butler, and Lighting Technician Tim Durham have created interesting moments in the narrative, such as scenes played as if anonymously in silhouette and street sounds when a character mimes opening a door to step outside.

Not knowing what to expect then finding out and being mind blown is what for me connects the dots among high-points in Fringe-going. This is such a dot. Don’t miss it. The Heroes’ Tale does something amazing.