A light night of theater Repentance is not. In one uninterrupted dialogue that unfolds over the course of 90 minutes, Repentance tells a story of mental anguish, power games and abuse. 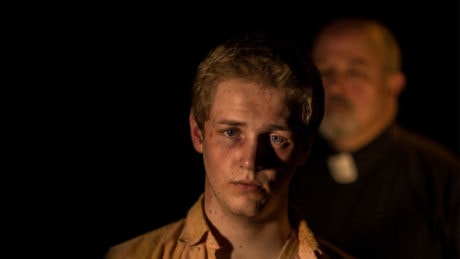 William Aitken as the Priest does all the heavy lifting early on in the show, with an extended monologue delivered with confidence and pathos. Aitkin is clearly a priest with issues. We catch snippets of dialogue about pedophilia and see that he is in a damp, bare basement. Oh, and there is a young masked man tied to a chair behind him.

The Prisoner is soon unmasked and actor Griffin DeLisle wastes no time in confronting the Priest for imprisoning him. A dialogue ensues between the two men that soon upturns the roles of captor and captive.

I enjoyed the dense script that was delivered with skill by both actors. I left the show however, feeling like the story left a lot of questions unanswered. Yes, stories of abuse by the Church are important ones but this script seemed more of a shock vehicle to create the character of a creepy priest than to analyze a systemic problem or put forth answers. Not that it has to do that, but after about 60 minutes, I had had enough creepy priest for one night.

Director Carl Randoph, in coordination with Roc Lee (Sound Design) and Dean Leong (Lighting Design) added much depth to the production through the use of atmospheric music and lighting. Ambiental music (uncredited in the program) underscored much of the dialogue and was very effective in adding tension and drama to the production. The drip, drip, drip feel of the damp basement (Shop Keepers, the basement venue where this show plays is a perfect venue for this play) was highlighted through sound and light as well.

I didn’t learn much about abuse in the church while watching this play, but I did enjoy the character study in power and depravity.