Toni Rae Salmi is an actor seen frequently on DC stages, most recently “enjoyably grand” in Perfect Arrangement at Source Festival. In Help Me, Wanda!, she belts out a rockin’ song list—much of it tunes made famous by the “Queen of Rockabilly,” Wanda Jackson. Backed by a four-member band upstairs at Solly’s Tavern, Salmi also weaves through her set an inspiring and autobiographical woman-centric narrative about mustering confidence and gumption to stand one’s ground in a world staked out by men. It was rockin’ music mixed with moxie, and a crowd-pleaser from beginning to end. 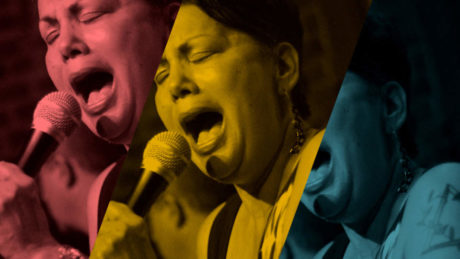 Wearing a sleeveless black sequined sheath, a pixie cut, and heels, Salmi took the mic in hand and the audience into her confidence. Admitting this was her first-ever cabaret show, she drew us warmly into personal anecdotes about both Jackson’s life and her own.

“I Gotta Know,” she sang, from Jackson’s 1960 rockabilly album Rockin’ With Wanda:

And she nailed the classic “Hard Headed Woman” from Jackson’s 1961 rock album There’s a Party Goin’ On:

Rock legend Wanda Jackson was said to be “the only woman who could do justice to an Elvis song.” Back in the day, Jackson even dated Elvis—before she met and fell in love with the man to whom she would be married for 55 years (Wendell Goodman, who died in May).  At the indefatigable age of 79, Jackson is “not hiding her age,” said Salmi, and “still touring with a bad-ass rock band.” Inspired by Jackson’s career-long brazenness, Salmi began putting her own act together.

Not all Salmi’s song list originated with Jackson, but her choices fit the evening’s build-me-up bill perfectly. She did a rendition of “Maneater,” for instance, with a gender flip in the lyrics:

And riffing off personal anecdotes about her own love life, she upped the energy in the room with her heartfelt/sarcastic version of Lindi Ortega’s “I Want You”:

Salmi’s admiration for Jackson goes beyond the legend’s love life and artistry. “The woman has a backbone,” Salmi told us. Once when a venue manager would not allow her black keyboardist to accompany her, Jackson answered, “He plays or I don’t.”

The first rock song Jackson wrote was “Mean Mean Man,” and Salmi knocked it out of the park.

Affairs of the broken heart suffused several numbers, and Salmi knew whereof she sang. “I once asked a man I was seeing, ‘Why are you treating me this way?’ He answered, ‘Because you’re letting me.’ Don’t stay with anyone who makes you lose your spark.”

Then she sang an over-the-top hilarious revenge song, “I’m gonna shoot you in the dark,” finally surprising us with who wrote it for her: Musical Director and Keyboardist Felix Pagés. Following that Salmi did a pointed performance of Jack White’s “Love Interruption”:

I won’t let love disrupt, corrupt or interrupt me, anymore.

The show’s peak empowerment moment came with Muddy Magnolias’ redo of “American Woman,” which began powerfully with Salmi singing solely to the accompaniment of Ryan Ciliax on drums:

Near the end, Salmi got even more personal, sharing stories of her adoptive mother and her birth mother. “Without those two women I wouldn’t be who I am today,” she said, then began the most moving song of the show, Guns n’ Roses’ “Sweet Child o’ Mine.”

Ending up-tempo and upbeat, Salmi closed with Jackson’s 1960 Top 40 pop hit, “Let’s Have a Party.” And that was exactly what we’d had.

Also in the band were Hector Moncada on lead guitar and Moe Hendawi on bass guitar, and Salmi was joined on stage by Brittany Alyse Willis in a couple duets.

One technical quibble. Granted this is Fringe, and granted Solly’s is not a fully equipped theater, but lighting and sound on opening night needed tweaking. For most of the show, Salmi stood in a dim glow emanating from strings of tiny white lights hanging like curtains stage left and right. There was almost no light on her from the front, which meant her wonderfully personable facial expressions were in shadow. Meanwhile, the band behind her was brightly lit at all times. Similarly, the sound balance favored the instruments over her vocals. Salmi delivered a star turn and deserved better.