By far the best show I have seen at Fringe so far this year, The Regulars will have you laughing in your seat, squealing at insider “DC” jokes and dancing in the aisles, (Really, be prepared. They will ask you to dance.) 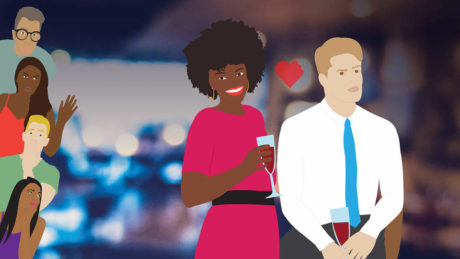 While this is not a perfect production – some of the acting is stronger than the rest – the script is near perfection and deserves to be seen as a highlight of the 2017 Capital Fringe. Co-written by Chinwe Nwosu and Sherrita Wilkens, two writers who are clearly going places, The Regulars tells the story of Nikki (Chayla Simpson), a young African-American woman who lacks confidence at the dating game. Spurred on by a hilariously brash older cousin (Gina, played by Eva Lewis), Nikki takes the plunge and enters the world of online dating.

The Regulars mines the subject of online dating for comedic gold. In scene after scene, relatable quandaries are raised: When texting a relative stranger, do you go with the winky face smile, or remain emoji free? How much sharing is too much? How much cleavage is too much?

In between all the jokes, the script manages to touch on some serious issues: The daunting odds that African American women have of finding a spouse after age 27, the complexities of interracial dating, and just being a good person and not coming across as a jackass when meeting people with backgrounds that differ from your own.

The strongest performance in this ensemble cast is that of Chayla Simpson as Nikki. Simpson was a joy to watch as the smart and beautiful woman who just needed a boost to get in the dating game. Also fun were the four friends at the bar who decided to observe Nikki’s date for entertainment: Inestin Petit-Homme, Courtney McNeal, Peter Pinocci, and D’Arcee Neal share some of the best dialogue in the show.

Bryanda Minix’ direction made excellent use of the small black box space.

Kudos to the creative team behind this production. I can’t wait to see what you do next!