Cabaret, the blistering musical satire written more than 50 years ago by John Kander and Fred Ebb, stormed into The Kennedy Center this week with a performance that had the audience on its feet, and roaring with approval at curtain.

The response is resounding proof that the show – both in its original form, created by the writers and directed by Harold Prince in 1966, and in its current production, devised by Sam Mendes and Rob Marshall in 1993 – is still relevant.

On its surface, Cabaret is the story of a young American novelist, Clifford Bradshaw, who comes to Berlin to get a taste of “real” life and write about it. Befriended by a German with a lot of connections, Clifford quickly settles into a rooming house run by a middle-aged spinster named Frauline Schneider. Just as quickly, he finds himself at home in the Kit Kat Club, a seedy nightspot where a devilish Master of Ceremonies lords over the patrons and where a British waif named Sally Bowles takes the stage nightly and belts out baudy songs. Subplots involve a hooker named Fraulein Kost and a middle-aged shop-keeper named Herr Schultz.

Beneath the surface, of course, Cabaret is another story, a tale of a country spiraling downward – defeated by war and economic depression – while fascism, in the form of the Nazis, is on the rise.

Jon Peterson is the Emcee from hell, the nameless master of debauchery who presides over the club and directs its raucous assemblage of dancers, strippers and musicians. Peterson imbues the role with a combination of daring and slime. Leering throughout, he has a voice that penetrates the very walls. He is at his best in the opening number, “Willkommen,” and in “Money,” a patter song about social and economic justice that is very much part of its time.

Leigh Ann Larkin is Sally Bowles, the girl who’s run away from Mother England – “Don’t Tell Mama” is one of her naughtiest early numbers – and who, on being thrown out of the Kit Kat Club, moves in with Cliff, the American writer, who happens to be exploring his sexual identity.

Sally is the quintessential good-time girl who is happy with her life. Larkin does a very good job portraying both her innocence – caught in the suggestive notes of “Mein Herr” and the dreamier ones of “Maybe this Time” – and her loss. Her anger, in the final rendition of “Come to the Cabaret,” is palpable.

Benjamin Eakeley is thoroughly credible as Clifford Bradshaw, the earnest young man who is eager to experience life, while Patrick Vaill is the helpful German who is happy to smooth his way.

Alison Ewing does a spirited turn as the brazen hooker – who at one point seems to have the entire German Navy in her bedroom – and Scott Robertson is a jolly Herr Schultz, the middle-aged Jewish widower whose proposal puts the subplot in action.

One of the biggest surprises in the show is Mary Gordon Murray, who plays Fräulein Schneider, the landlady whose avarice – or fear – is her undoing. Murray is a fine actor and a powerful singer.

The Cabaret that is currently at The Kennedy Center is not the same as the original Kander and Ebb production. While the music and original book by Joe Masteroff are largely untouched, the Mendes version is darker than the original. However, it is closer in style to The Three Penny Opera, on which it is based.

Musically, this Cabaret is astonishing. Considering that The Kennedy Center is the last stop on a national tour of 46 cities – a tour sponsored by New York’s Roundabout Theatre and begun in January 2016 – one might expect a falling-off of tone or even a loss of resources.

Instead, this full-blooded production features a 29-member orchestra, many of whose members double as dancers and singers. Conducted by Robert Cookman, with Bruce Barnes on keyboard, the so-called Kit Kat Band is as brash and talented as its predecessors on Broadway and at Studio 54.

Some of the stand-outs are Lori Eure, who cavorts on a bannister while playing a mean French horn, plus a gaggle of sax players, horns and strings, clarinets, accordions and drums and even a banjo. (This is a lot more than most Broadway productions can manage nowadays!)

BT McNicholl is the director who, inspired by Mendes and Marshall, has now staged Cabaret on three continents. Cynthia Onrubia is the current choreographer and Keith Caggiano has done a super job supplementing the sound of the band.

The set is both ingenious and elaborate. Designed by Robert Brill, it creates a multi-level world. In it, the highest tier is the orchestra pit, the middle tier is the club – with a stage jutting out toward the front and stairs on both sides – and the lowest level is a carriage on a train or Cliff’s rooming house digs.

The lighting – and especially the neon lights that frame the stage of the club – is by Peggy Eisenhauer and Mike Baldassari, who have also created a complex structure of spotlights that brighten the Kit Kat performers while adopting more natural lighting for the scenes below.

William Ivey has designed costumes as brash – and occasionally as crude – as the Mendes direction. Certainly the Emcee and the dancers are dressed as provocatively as one can imagine. (Though I doubt that anyone could imagine the outfits worn by the Emcee, who sports suspenders over his nipples.)

Ivey has also achieved outfits for the supporting actors that are as easy-to-identify, and telling, as signs. The landlady’s apron, for example, speaks volumes, as does the hooker’s red cloak.

Cabaret has a long history. It began as a series of episodic stories in Christopher Isherwood’s semi-autobiographical novella, Goodbye Berlin, which was included in Berlin Stories in 1939. The book was adapted for the stage by John Van Druten, whose play, I Am a Camera, starred Julie Harris.

It was Harold Prince, the great director-producer, who had the idea of linking Kander and Ebb – who were admirers of Brecht and Weill – to the Van Druten play. The Mendes-Marshall version, which is now 24 years old, is a timely reminder that behind the decadence and the Nazi threat lay the Holocaust itself.

The Kennedy Center/Roundabout Production pays full justice to this history. The show is a tough-minded interpretation of one of the finest musical dramas of our time.

If you’ve never seen Cabaret – or if you haven’t seen it in a long time – then now is the time to heed the call. Or, as the Kander and Ebb song says, “Come to the Cabaret, my friend, come to the Cabaret.”

(Note to Washington producers – won’t someone revive The Visit, Kander and Ebb’s last play, written, though not completed, before Ebb’s death in 2004?)

Running Time: Two hours and 30 minutes, including one 15-minute intermission. 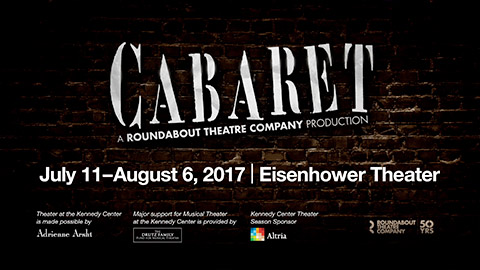