Deserving recipient of an Academy Award for Best Actor, or modern-day Faust who sold his soul to capture Hollywood’s biggest honor? Emilie Landmann (book), Carrie Morgan (book and lyrics), and Jonathan Quesenberry (music and lyrics) make a zany case for the latter, in Matthew McConaughey Vs The Devil. The funny new work by the Portland, Oregon-based trio – presented by Everything Rhymes with Blorange in a full-stage premiere at this summer’s New York Musical Festival (NYMF) – is a post-modern parody of the classic German legend and the sometimes surprising nature of success and celebrity that asks the burning question, “How the hell did this guy win an Oscar?”

Directed with high energy and laugh-out-loud humor by Thomas Caruso, the show skewers everything from the inner workings of the Hollywood star system to the religious beliefs on which the tale of Faust is based, in a go-back story that recounts the origins of the eponymous actor (played by Wayne Wilcox), lampoons his reputation as a bongo-playing pot-smoker typecast in mediocre rom-coms, and wildly re-imagines the circumstances that led to the “McConaissance” – his meteoric rise from “that stripper movie” of 2012, to Oscar night 2015. In his desire to “be taken seriously as an actor” and to gain the respect of Leo (Riza Takahashi) and the A-list circle of detractors who consider him “a fucking joke,” Matty sets his sights on winning the coveted award (“I Could Win an Oscar”), with a little help from his BFFs Woody (Max Crumm) and long-time agent Penny (Jennifer Blood), and a whole lot of help from Mephistopheles herself (the terrific Lesli Margherita), in a high-stakes deal with the devil that could lead him straight to hell.

The script is loaded with witty pop-culture references (it helps if you’re familiar with the careers of McConaughey and friends, including his oft-repeated quote “Alright, Alright, Alright,” his ad campaign for the Lincoln Motor Company alluded to in the number “Lincoln Guy,” his dedication to animal rescue, and Woody’s bartending to a few instantly recognizable notes from the theme song of his Emmy Award-winning sit-com) and wacky characterizations that are delivered with comedic control by the cast. Under Caruso’s well-tempered direction and pacing, they bring the laughs quickly, without resorting to over-the-top histrionics or extended milking.

Wilcox transitions from the innate bohemian style and cluelessness of the protagonist – who all too gullibly signs a contract with the devil without first reading it – to a self-important star who all too easily dismisses his old friends, wears shoes (much to Woody’s dismay), and neglects to acknowledge anyone’s help in his red-carpet interview, then reverts back to the same old zoned-out stoner and middling talent (in a subtle and side-splitting scene of bad acting, which is not easy for a good actor to do!), after they convince him to be himself again (“You Do You”) to save his soul. Crumm brings Woody’s love of pot, nerdy need for emotional attachments, and ultimate altruism in the face of repeated rejection to his performance, and Blood shifts from a loyal rep to a “bitch-in-charge” and “boss-ass agent” while performing a riotous rap about “The Finer Things” with Mephistopheles and her female minions.

Margherita, who took home last year’s NYMF award for Outstanding Performance in a Leading Role (and should garner another nomination this season), steals the show as Satan’s agent on earth (and send-up of all pushy agents in the entertainment industry), with her powerhouse vocals, seductive moves, tough-talking attitude, and priceless facial expressions, each timed to perfection. Cameisha Cotton, Koh Mochizuki, Frankie Shin, Nicole Vande Zande, and Betty Weinberger, along with Takahashi, round out the cast as the ensemble of vitriolic stars, devilish gospel choir, vengeful “Ghosts of Girlfriends Past,” and performers in a drug-induced “Weed Ballet.” Billy Griffin provides the dynamic choreography and Kristin Stowell the musical direction (in addition to conducting the live five-piece band and performing on keyboard) for the amusing array of songs and dances. While not all of the individual vocals hit the mark, the group numbers are generally harmonious and entertaining.

A clever set design by James Fenton places us behind-the-scenes of the famous Hollywood sign, with the letters seen from behind. A simple rectangular box easily converts with the flip of a cloth from the bar of the Oscar after-party (one of the show’s funniest segments, featuring Mephistopheles becoming increasingly intoxicated) to the high altar of the church in which McConaughey prays for the salvation of his soul (while singing through “The Five Stages of Grief”). Zach Blane’s lighting design employs flashlights for scenes on the dark side and a flaming red backdrop for the inferno of hell, and costumes by Daryl Stone visually define the personalities of the celebrities (in trendy black attire), demons (in hot red), and stoners (in unkempt everyday streetwear).

Although the Faustian story of Matthew McConaughey Vs The Devil pits friendship, love, and loyalty against greed, control, and unkindness, in the end it is less a morality play and more a lively hour-and-a-half of contemporary musical satire that keeps the audience laughing and nodding at the familiar behavior. It’s a lot of fun. 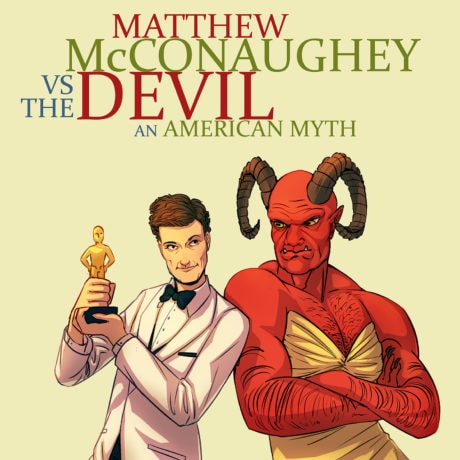 Matthew McConaughey Vs The Devil plays through Sunday, July 16, 2017, at the New York Musical Theatre Festival, performing at The Acorn Theater at Theatre Row – 410 West 42nd Street, NYC. For tickets, call the box office at (212) 352-3101, or purchase them online.