Adapted from the verses of beloved children’s book author and poet Dennis Lee – known to generations of fans as “Canada’s Father Goose” – Soulpepper Theatre Company’s ensemble-devised Alligator Pie, playing as part of the 2017 Soulpepper on 42nd Street festival at the Pershing Square Signature Center, is an original family musical that not only charms and captivates kids, but also dazzles and delights adults. Co-created, performed, and self-directed by five current company members (and former students of the Soulpepper Academy who grew up reading Lee’s work), the award-winning show is smart and silly and creative and colorful, and provides proof positive that this world-class Toronto-based troupe excels at everything it does, from the classics and conceptualism, to concerts, cabaret, and children’s theater.

The terrific team of Ins Choi, Raquel Duffy, Ken MacKenzie, Gregory Prest, and Mike Ross embraces the playful spirit of childhood, exuding youthful imagination and energy, and clearly enjoying putting on the show as much as the audience does watching it. The stage is scattered with green alligator-print trunks (production design by MacKenzie), from which they emerge (“Ow!”), then pull goofy costumes and props, real musical instruments, and an assortment of found objects and office supplies that they cleverly use for percussion in their series of recitations, songs, and dances. Staplers and tape, boxes and cans, beach balls and bubble wrap all add to the synchronized rhythm of their clapping, snapping, bouncing, and stomping to the beat of Lee’s rhymes, set to their tuneful harmonies and original melodies, ranging in style from rap to doo-wop to tango (music direction by Ross).

Filled with fun and fantasy, the poetry-based skits weave witty tales of bratty brothers, monsters and elves, cats and wizards, and other assorted “aminals,” along with the much maligned mulligan stew and the eponymous alligator pie that everyone craves. Each number, along with its winning sense of humor – a scene delivered in broken French is hilarious, and the self-referencing jokes about appearing Off-Broadway are especially appealing to a New York audience – underscores the importance of having friends to share in the good times and to miss when they’re away.

Soulpepper’s Alligator Pie reminds us that truly great children’s theater is great theater for all ages, so whether you’re young, or young at heart, you can’t help but love the inventiveness, enthusiasm, and talent of this superb company and the joyful tone of this delectable show. 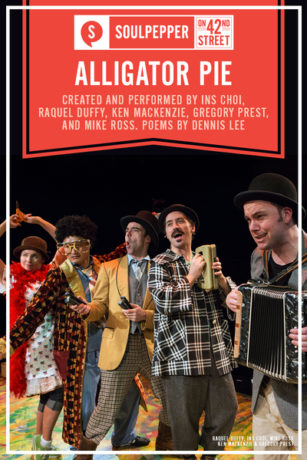