The Lion in Winter, written by James Goldman and directed by Jordan Friend, opened this weekend at The Highwood Theatre in Silver Spring; it is being performed in repertory with King John. The play is presented by 4615 Theatre Company, which has found a permanent home at The Highwood. The group often performs Shakespeare paired with a play written in that era, but this time picked a contemporary written play about the same historical time. Several actors play the same character at different times of their lives in the two productions.

The theater itself is intimate and unusual for such powerful drama. However, it works, giving the audience the feeling that they are right there in the castle observing the action. I imagine that the servants of Henry II and Eleanor of Aquitaine felt much like I did watching the plots and twists unfold.

The play is based on the story of Henry II and Eleanor and three of their sons. History supports Goldman’s recounting that the sons, along with their mother, conspired against Henry II; each had their own agenda – to gain power and, perhaps, determine who became heir to the throne. Eleanor is being held by her husband under house arrest. This kept her away from her sons for many years and is also historically accurate.

Henry and Eleanor have a marriage filled with strife and conflict. Some of this is due to the king’s philandering and a series of mistresses, some of whom he loved more than his wife. As the plot moves along, we are privy to the wheeling and dealing of Henry, Eleanor, the three princes – Richard, Geoffrey, and John – as well as that of King Philip II of France and Philip’s sister, Alais, who is betrothed to Prince Richard – and is also Henry’s mistress.

As soon as it seems one of these wins this familial contest, that character is trumped by the machinations of Henry or Eleanor. Both use sibling rivalry to motivate their sons to do exactly what the parental monarchs desire. Both the king and queen often seem to do this just to hurt each other, which leaving us wondering if they love or hate each other. The play may not be always true to the facts we know about the Plantagenet reign, but this is a universal story of the struggles of power, love and family.

James Allen Kerr, as Prince Richard the Lionheart – who later became King Richard I – is the perfect older brother. His portrayal of the well-educated prince who is Eleanor’s favorite has wonderful nuances. We wonder if he loves his mother or hates her, if he wants his father’s approval or scorn, if he wants to marry Alais, or does he love her brother, the handsome young French monarch. Kerr creates a wonderful character that remains regal but also full of petty jealousy.

Charlie Cook is the often-forgotten brother Geoffrey. He captures all the angst of middle child syndrome in the role. Much like his parents in some ways, he connives to insure his own fortune and safety. Cook could easily have us like him too much. Instead, we often detest him as much as his brothers and parents. Just when we feel sorry for him, Cook unveils to us his villainy.

Seth Rosenke plays the more hapless brother, John, who later became King John of Magna Carta fame. John is the youngest and, in this play, the dullest and most ungainly of the group. Rosenke does an excellent job conveying his awkward youth and vulnerability to us without being too juvenile. John is only about 16 at the time of the action. At one point, he carries a toy while trying to become heir to throne.

Morgan Sendek is Alais, who is in love with Henry in this story. (There are historical disputes about her role.) Sendek allows her Alais to be manipulated, but also remains strong. She is, in some ways, the most torn character. She has strong allegiances to her brother, the King of France, but strong ties to the English royal family. She loves Henry, but is angry with him for trying to use her as a marriage pawn with his sons. Most effectively, Sendek shows us how emotionally ripped the young maiden is in her relationship with Eleanor. In this play, Eleanor had been Alais’ surrogate mother and now the young maid is the mistress of Eleanor’s husband.

Brendan McMahon is the French King who, at 17, must take on the 50-year-old Henry. McMahon’s stature and posture make him regal, but McMahon exposes us to the boy behind the man when Henry outmatches his efforts of conspiracy.

But this is play is really about the strange relationship between Henry II and Eleanor. Peg Nichols is a strong, powerful queen. We see her go from high points, where she seems all powerful, to lows, when she seems lost and broken. We are never sure if she loves Henry and her children or detests them all. Even when she shows affection to Alais, Nichols makes us wonder if it is sincere. She plays this complex character to perfection. 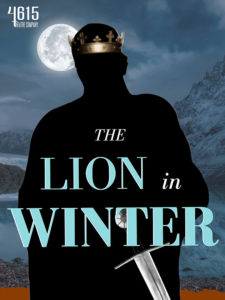 Nick Torres is Henry II every moment he is on stage. He is strong and fiery. He loves passionately and hates just as strongly. We admire him and despise the way he treats his wife and sons. We care about him but realize this is a very complex man who has become very wise with age. The scenes between Torres and Nichols are meant to be the most powerful, and these two fine actors have made them riveting. We are transfixed by the two when they are together as they duel each other for power over their realm and their family.

Jordan Friend’s concept of intimate drama is well-structured. He uses actors to move a very sparse amount of set, just some furniture and a few props against a black background with an impressionistic panel in the middle. As I stated, it brings us right into the drawing room and cellar of this medieval castle. His tight direction keeps this a heavy-hitting drama and not a melodramatic soap opera. He keeps this a royal chess match and we wonder if anyone will call out checkmate.

This minimalist set lends a Shakespearean feel to the production and credit goes to Nathaniel Sharer for making this work. Lighting Design is done by E-hui Woo and the lights create much of the mood of the play. The period costumes were designed by Jeanette Christiensen, and they worked well in helping create the characters – from the brocades of King Philip to the gauzy nightgowns of Alais.

The play makes us realize that sibling rivalry, plays for power, broken marriages, duplicity in diplomacy, and parental shortcomings were as much a part of the human condition then as they remain today.

Roar on down to The Highwood Theatre to see 4615 Theatre Company’s powerful and well acted take on this modern classic.

The Lion in Winter plays through August 5, 2017 in repertory with Shakespeare’s King John at 4615 Theatre Company performing at The Highwood Theatre – 914 Silver Spring Avenue, in Silver Spring, MD. For tickets, call (301) 928-2738 or purchase them online.