Top-notch performers, frequent laughter, applause, audience sing-alongs, and an all-in standing hymn recital characterized a night at Rockville Musical Theatre’s production of Monty Python’s SPAMALOT. The fine points and flourishes in this farce about finding the Holy Grail made for a supremely satisfying experience. The production would make Monty Python proud.

The critical role played by the production team was immediately obvious. King Arthur’s unlikely adventures were framed by Saira Umar’s stone fortress with huge front double doors and turrets askew. Above the castle hovered two clouds which served as screens for multiple projections which often added the punchline to scenes. When ordered to walk, the clouds showed two very splayed feet and when bad weather was in the offing, lightning bolts appeared.

Live music, under the direction of Marci Shegogue, provided a thrilling accompaniment and was especially effective in supporting the multiple roles played by the ensemble. Along with choreography by Michael Page and Ginger Ager’s costume design, the music carried the ensemble through their roles as Finns in “The Fish Schlapping Song,” Vegas showgirls, the Laker Girls, a can-can line, and knights who say ‘ni.’ Ager’s costume for Sir Lancelot at the gym is a show in itself.

The unmistakable star voice of the night was Lee Michele Rosenthal as Lady of the Lake. She portrayed many sides of the Lady through her singing and stage presence. Rosenthal would be a perfect candidate for a one-woman musical show.

Galloping alongside were King Arthur and his faithful servant and the back end of his horse, Patsy (Brian Lyons-Burke and Duane Monahan). In his search for the Holy Grail, Lyons-Burke projects emotions ranging from pomposity to confusion and total despair. He used both his booming voice and his face and body to characterize emotions, including a few risqué hip shakes when happy. Monahan, as the servant Patsy, displayed his dismay at King Arthur during “I’m All Alone,” Arthur’s pity party during which he refuses to acknowledge Patsy as a person worthy of being a friend.

Matthew Rosenthal uses his cherubic looks and demeanor and sweet voice to play Prince Herbert, a young royal about to be married to a woman against his will. Instead, he pleads for Sir Lancelot (Mark Hamberger) to rescue him. His number, “Where are you?,” was particularly haunting. Lancelot, finally with his true love, becomes even more macho than before, as demonstrated in the work-out scene.

Hans Dettmar, as Sir Robin, has many fine moments. The most memorable song was “You Won’t Succeed on Broadway” (if you don’t have a Jew).

Zoe Alexandratos played the role of the French Taunter as well as participating in the ensemble. The proverbial garbage that spewed from her mouth as she confronts King Arthur and his Knights in front of her King’s castle was both harsh and hysterical, made even more so by her ‘French’ accent.

Producers Dana Robinson and Ruth Orland and Director Clare Shaffer allowed their cast and crew to take SPAMALOT, written by Eric Idle with music by John Du Prez, to a new space where the dialogue is fresh, the humor is side-splitting without being slapstick and the music transports.

King Arthur does finally find his true love, Lady of the Lake, and completes his quest for the Holy Grail. The Holy Grail is found in a most unusual place, as you will discover if you indulge in this theatrical treat. 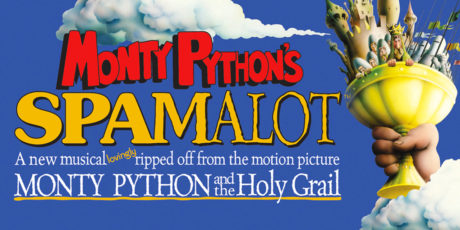