The world of  Wig Out! is a glittering fantasia on house ballroom culture. Tarell Alvin McCraney’s ingeniously metatheatrical 2006 script sets this play with music in the urban underground that came to mainstream attention with the 1990 documentary Paris Is Burning. It’s a subculture that offers safe space where refugees from white cis heteronormativity—mostly black and latinx LGBTQ youth—can find friendship, gender-expression freedom, self-acceptance, alternate families, and celebration of who they are.

Just opened at Studio Theatre is a spectacularly powerful, funny, and feel-good production of McCraney’s play, newly updated by the author. Under the inventive direction of Kent Gash, a long-time collaborator with McCraney, Wig Out! abounds in  outrageously fabulous costumes, dazzling choreography, and a cast that won’t quit knocking us out. McCraney’s poetic and wittily slang-filled script also contains moving scenes of relationship drama—poignant stories of love, lust, loyalty, and loss that play out in intimate, and sometimes graphic, detail,

The upshot is a show so sizzling hot it promises to be DC’s next sold-out summer hit.

The top floor of Studio has been the site of many of the District’s best immersive stagings. It was transformed into a dive bar for Murder Ballad, a cabaret for Silence! the Musical, a church basement for Hand to God. Now for Wig Out!, Set Designer Jason Sherwood has installed there a glitzy catwalk down an alleyway the audience sits on either side of. (With only 108 seats in the house, none more than four rows from the stage, the show gets up-close and personal pretty fast.) There are four mirrored doorways framed by assemblages of photos, manikin parts, posters, old electronics, and other memorabilia of eras gone by. Even before the show begins, the theater space has an exhilarating and intriguing vibe. Then when the performance starts, Lighting Designer Dawn Chiang’s moods and blazes and Sound Designer David Lamont Wilson’s galvanic music make it all go wowza.

McCraney’s version of ball culture imagines two rival “houses,” families as fiercely antagonistic as the Montagues and Capulets, except instead of sword-fighting they vie for victories at balls, late-night runway performances where individuals as representatives of their house are judged on dance moves, fashion, demeanor, and convincingness. The competition can be cutthroat, as it gets in Wig Out! between the House of Light and the House of Di’abolique.

Before we meet the two houses, we are visited by the Fates, a high-energy trio of young women named Fay (Ysabel Jasa), Fate (Melissa Victor), and Faith (Dane Figueroa Edidi). Appearing periodically in the play like playful pick-me-ups, and sometimes somber witnesses, they are part Greek chorus, part chorus line, part hip-hop girl-group, and wholly enchanting in their synchronized choreography and vocals.

Among the poignant relationship dramas in Wig Out! is the one that begins on a subway when Eric (Jaysen Wright), a handsome hunk, is hit on by Wilson (Michael Rishawn), another handsome hunk, who at the moment is in drag. Eric’s initial ambivalence is overcome by Wilson’s irresistible advances, and they go to Wilson’s place where they have steamy sex. That evening Eric learns Wilson is also Ms. Nina, and she begins to introduce Eric to her world as one of the kids in the House of Light. The complex romance between Eric and Wilson/Ms. Nina is a heart-tugger throughout the show, including after Wilson/Ms. Nina comes out as trans, and Wright and Rishawn play their richly written roles with breathtaking versatility and naked honesty.

Meanwhile in the House of Light, other riveting relationship dramas come to light. Venus (Edwin Brown III), a beautiful young man in drag, had a thing once with house DJ Deity (Desmond Bing), a straight-acting dude who digs male bodies, and Deity wants to rekindle it. Ever on the prowl, Lucian, the house father, has or had a thing for many, and Darnall plays him with a Don Corleone swagger that’s both menacing and seductive. Rey-Rey, the house mother, knows her youth is fading and she’s lost luster in Lucien’s eyes, and Dobson plays her touchingly with all the grandeur that is her due and all the brokenness she does not deserve.

Rey-Rey has a monolog that references her struggle to uplift the House of Light while the AIDs plague raged and decimated the gay and drag communities. It’s a passage that exemplifies McCraney’s superb writing in Wig Out!, and Dobson’s delivery of it is profound:

When this house was early light, low light
I came in here and worked this bitch you hear
Me. When it was not a time or place of glamour
In the scene I put the couture back in the bash.
That was my ass walking down with the true strut
Of fashion icon. I brought win after win and the name
Legendary to a house with little to no light until
There was Rey there was no way so even though I
May not have the glow of youth mother fucker
I got the glam of age. I know what its like to try
To hold up fabulousness while everyone withers
And dies around you. I walked amongst the legends
Who didn’t make it thru. I lost most of my house to
An AIDS war that the kids didn’t know how to survive.

McCraney’s text borrows from black, gay, and drag slang with beautiful abandon—and may leave those not in the know a little in the dark. But this is a cast that got deep inside the language and they know viscerally of what it speaks. If you miss some idioms, just let ’em go by, and trust the actors to let you know what’s meant.

(I tried making some educated guesses instead and learned that’s not a great idea. For instance, there’s a scene where the Fates are working hard rehearsing a routine for the Cinderella Ball and Venus tells them, to encourage them, “You’re fish, honey, real women.” Thinking the word fish was derogatory, as it is used among gay men to describe women, I got confused. Turns out, I learned later on Google, in the drag world fish is a great compliment, and an acronym for “fit, intelligent, sexy, hot.”)

Though some of us may seem to have come as strangers into a strange land, McCraney has given us the wonderful character of Eric. His winsome naivete is also ours as he seeks to figure out this unfamiliar world and whether he belongs in it.

At a point in Act One, Eric has a dream in which all that he imagines the scene might be suddenly comes to life in the persona of Serena (Frank Britton), “Mother of the House of Di’abolique.” Wearing geisha makeup, a flamboyant kimono, an extraterrestrial hairstyle, and boots a foot high, Britton rips up the stage lip-syncing “White Rabbit” by Jefferson Airplane (“Go ask Alice, when she’s ten feet tall”). Meanwhile, Mills as Loki, a lost-boy in Serena’s house, does an unbelievable contortionist-gymnastic floor routine. This was the first moment that felt like a showstopper had just happened. It would not be the last.

There would be lots more scene-stealing fashions from Costume Designer Frank Labovitz and lots more jaw-dropping movement and dance from Choreographer Dell Howlett and lots more emotionally wrenching scene work by the actors. There’s so much talent onstage and offstage for this show, it fact, it’s like non-stop overwhelming sensory stimulation.

So get ready for the fandemonium.

There’s a question you’ll be hearing from ecstatic theatergoers this summer: “Have you seen Wig Out! at Studio yet?!” And once you do, you’ll be asking the question too. 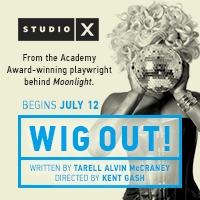