Sunny and cheerful is how I felt after an hour or so with Happenstance Theater’s Bon Voyage! A Happenstance Escapade.  The original production, currently at Round House Theatre in Bethesda, made this usual cynic a co-conspirator and participant in the merriment.

Its good natured, six member, seamlessly woven-together ensemble charmed me. There was bright chirpiness, non-froufrou amusement, along with a sly mixture of old-school and contemporary soft-core clown=esque arts. Add in solidly and sincerely delivered moments of progressive wisdom from America’s Statue of Liberty, as well as from Marianne – the symbol and personification of French liberty, equality, and camaraderie – and voila, all was magnifique.

The amiable Happenstance band is composed of nimble, light-on-their-feet Mark Jaster, Sabrina Mandell, Karen Hansen, Gwen Grastorf, Sarah Olmsted Thomas and Alex Vernon. Together in Bon Voyage! A Happenstance Escapade, the acting troupe is family-friendly and endearing. For those of a Baby Boomer bent wanting to take older grand- children out for live theater, perhaps think of Ed Sullivan and his variety show atmosphere with mime Marcel Marceau or the talking mouse, Topo Gigio, in that time before the digital world. And for current parents, think of the time you may have spent in front of the television with Pee Wee Herman’s Playhouse’s gang of joyful, rule-breaking characters.

The show begins as the ensemble meets cute on what is to become an unlikely journey of personal and group discovery in Belle Epoque Paris. It is the time of the Grand Universal Exposition of 1889.

The journey involves a number of deftly-connected scenes. The scenes include how a bicycle provides newly won independence for a young woman, a visit to the Parisian catacombs that starts with a lost coin and ends with unexpected Ernie Kovacs-worthy laughter as a talking skull has some Borsch Belt comic bon-mots, as well as a bit of PG Can-Can dancing with a most improbable “lead” participant and a seductive talking snake. There are also stop-overs to ride a human-powered carousel, getting lost and finally reunited on the Paris Metro, and a wondrous visit to an art museum with a very magical picture frame that brings iconic, recognizable paintings to life (and without VR).

With live, peppy percussion-laden music arranged and/or composed by Karen Hansen as of well as recorded music of well-known classics, the mood of Paris is infused in each scene. Sometimes the music is comic in presentation and sometimes more serious. There are also a number of shrewdly concocted moments of audience participation as the players leave the stage. It is all so innocent, crafty, cunning and astute

The production’s major set piece is a tall, ingeniously and theatrically adapted ladder that can become, among other things, the Eiffel Tower and the Parisian catacombs (Jaster, Mandell and Vernon credited). One particularly precious simple scenic design moment involves a balloon held up perhaps 20 feet or more with tiny people hanging on for dear life. Colorful, functional costumes permitting the physical movements are credited to Mandell. A number of splendid silhouettes are created by Kris Thompson’s evocative day and night lighting design as even walls come to the foreground.

Now, in case, the folk at Happenstance are not well-known to you, here is a snapshot. Founded in 2006, Happenstance is a professional company that has committed itself “to devising and producing original, performer-created, visual, poetic Theatre.” Over the last decade, the company has performed at the Capital Fringe Festival, Round House, other DC venues, and well beyond. Happenstance has received a number of Helen Hayes nominations and awards for productions with titles such as Cabaret Macabre, IMPOSSIBLE! A Happenstance Circus, and MOXIE! A Happenstance Vaudeville.

Happenstance Theatre’s Bon Voyage! A Happenstance Escapade is a joy; let it take you away from the world and fill you full of glee. So, begin your own journey to Paris with Happenstance with these treasures to set the mood: “Helena – musette waltz” by Accordeon Melancolique and Gus Viseur’s “Flambée montalbanaise (Valse).” Get happy and find yourself in the mood for “Liberty, Reason and Hope,” to quote from the program notes of Happenstance’s Mark Jasper and Sabrina Mandell. And all without a hint of yucky unctuousness or drivel.


Bon Voyage! A Happenstance Escapade is a wonderful, sunny, family-friendly, throw-back of an escape.  It is a summer treat that swooped me back to more innocent times when having fun and joking around with friends was all the purpose needed to do something.  I needed that. Don’t you? 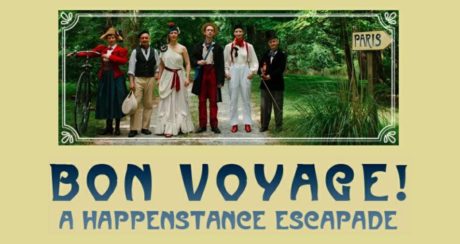