Landline, the latest from Gillian Robespierre and Elisabeth Holm, the creative team behind Obvious Child, opens with the sounds of… rutting, I guess is the word I can use in a family publication. The movie revolves around sex in many ways, how sex does and/or does not connect us emotionally to a person, even as the experience of desire makes us feel desirable. 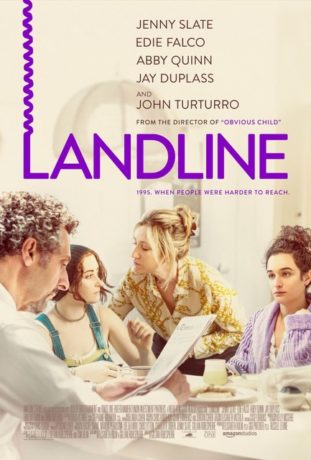 The story focuses on three generations of women in a well-to-do family living in New York City, and rich enough to have a place in the “country,” which is where the film begins. While Landline is about infidelity, in a sense, Robespierre and Holm aren’t interested in the nagging or the sordid ugly reasons for experiencing pleasures outside of a monogamous relationship – emotional or otherwise  –  and they aren’t much interested in the breakage of the aftermath either. Despite being a solidly #firstworldproblems kind of movie, Landline really seeks a different way to look at these things, by first of all focusing on the women, rather than the men.

There is a middle aged man (John Turturro) who wishes he was a better writer than he is who has an affair, blah, blah, blah, but we aren’t centered on him or his selfishness or really condemning him for it either. Rather, it is the refraction of that affair through the lenses and lives of his wife, Pat, played by Edie Falco, and their two daughters, Dana, played by Jenny Slate, the beating goofball heart of Obvious Child, and Ali, played by relative newcomer Abby Quinn, who is sensationally good as the youngest daughter in the midst of her prime rebel teenage years.

Ali discovers her father’s infidelity because he accidentally left a disk full of his love poetry to another woman in the family computer, which is like, so 1995. The 1995 vibe is established and maintained in this film with impeccable production design by Kelly McGehee, costume design by Elisabeth Vastola and the excellent music supervision of Linda Cohen, who put together an awesome 1995 era soundtrack, up to and including Angel Olsen’s modern grunge jam “Sister” a haunting song that still feels very, well, 1995.

Ali is incandescent with rage at her father, even as she is sneaking around with boys, disobeying her parents, and flirting with some hardcore drugs like heroin and crack. Ali eventually tells Dana, but not until after Dana, who is about to get married, has sex with an old flame more than a few times. Dana is now in the squirm-inducing emotional space of being mad at her father for exactly the kind of thing that she has just done. Like all of the best movies, few of Dana or Ali’s contradictions and complications are handled directly, because they are hot and they burn, burn, burn directors and screenwriters when they do. Instead, Robespierre and Holm stir these ideas, warm them gently, and let us marinate with them.

The film is quite frank in its discussions and depictions of sex, though not in a salacious way. It felt raw and open and vibrant and… beautiful. Wonder Woman is our morality play right now and that’s about as preachy as we need to get. Robespierre and Holm are not interested in lectures or punishment. These people make mistakes and they learn how to love each other amidst all the mistake-making. Landline is about growing, but not up or straightforwardly and not necessarily radically. Maybe we need to be a little bit different and time brings its own changes, but mostly we stay the same. Landline presents messy emotional realities with a vibrant wit and it encourages us, despite our flaws and maybe even because of them, to take as much unironic delight in the goofy pleasures of life as we can. That too is a story it feels like we need right now.

Landline is rated R for sexual content, language and drug use. It opens today in area theaters today (check here for showtimes and tickets).