For those who love musical theatre, there is something amazing going on in Fairfax, Virginia this weekend and next, as the City of Fairfax Theatre Company and Truro Anglican Church present Joseph and the Amazing Technicolor Dreamcoat. With lyrics by Tim Rice and music by Andrew Lloyd Webber, this production is a spectacular, high-octane, musical extravaganza that will leave you wanting more! Even if you’ve seen Joseph before – even if you’ve seen it many times – you will find that Director and Choreographer Erich DiCenzo puts his own stamp on it and the results are nothing short of delightful! And, Music Director Kirsten Boyd has a wonderfully keen sense of the story, while dealing with an incredibly varied score – from country-western to calypso to rock-and-roll and almost everything in between.

Joseph and the Amazing Technicolor Dreamcoat tells the Biblical story from the Book of Genesis about a young man with an adoring father and eleven envious brothers and his odyssey of tribulations and triumphs. The ultra-talented Elijah King plays the title role of Joseph with a generous helping of whimsy and panache, but with some serious moments as well. All eleven brothers resent Joseph because he spends most of his time dreaming and yet, he is the apple of his father’s eye. The last straw comes when their father gives Joseph a gift – a beautiful coat of many colors – and the brothers decide they must get rid of the goody-two-shoes dreamer once and for all.

With a lot of support from the 45-member cast, Elijah King as Joseph carries the show. He has a clear, rich singing voice and an amazing talent for dancing, especially acrobatic dancing. He has impeccable comedic timing and has plenty of chances to use it in this production. King also has a serious side which he displays in the haunting “Close Every Door” which depicts the hopelessness of prison life. In contrast, hope springs eternal when he sings the lovely “Any Dream Will Do.” And, for a large part of the show, King is naked from the waist up, so we should be forgiven for noticing that he has a fabulous physique!

Joseph is usually done with just one Narrator, but one of the twists of this production is that there are four Narrators: Bruni Herring, Tatiane Jones, Allyson Jacob, and Peyton Avery. They perform both solo and together and their voices and harmonies are gorgeous!

While he is a slave, Joseph’s owner is Potiphar, hilariously portrayed by Michael O’Dell. In another twist, Potiphar is an orange-faced multi-millionaire with ridiculous hair and a collar of large dollar signs. When he sends Joseph to prison, he shouts, “You’re fired!”

Joey Olson as Pharaoh is equally hilarious as he channels Elvis Presley in “Song of the King” while the ensemble jitterbugs to a driving rock-and-roll beat. Potiphar’s wife is played by the sexy siren Sophia Poteet, whose dancing is superb. Even the strong-willed, disciplined Joseph is tempted!

In fact, the entire cast displays dancing talent that would impress Terpsichore herself. In one scene, the brothers form a chorus line and their precision work is excellent. In the “Close Every Door” scene, there is a blackout and the dancers perform choreography with flashlights.

The cast’s singing is also amazing, but comedy is king. The brothers and their wives perform a county-western song, “One More Angel in Heaven” which is so funny, it has to be seen to be believed. Another unbelievably funny number is “Those Canaan Days,” performed as a French torch song.

Lighting Designer Jonah Hurley, Set Designer Thomas Iodice, and Costume Designer Lori Crockett combine their talents to add to the magic. The attention to detail is impeccable! When the ensemble is singing about “Joseph’s Coat,” the lights change when each color is mentioned. The costumes evince the theme of many colors and even the striping of the carpet in the audience follows suit! The basic set is a pyramid with clever moving parts and various anachronistic set pieces are included to add to the hilarity and fun. And the four-piece orchestra, led by Kirsten Boyd, is both unobtrusive and note-perfect.

Joseph and the Amazing Technicolor Dreamcoat is a tuneful, funny, and energetic romp with fabulous music and dancing, but it also has a serious theme. In this day and age of anger and partisanship and disagreeable disagreements, it’s important for us to remember not to belittle someone else’s dream just because it differs from ours. Surely, as long as we have hope, any dream will do.

Running Time: Approximately one hour and 45 minutes, with one 15-minute intermission. 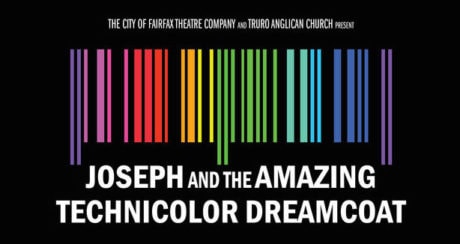 Joseph and the Amazing Technicolor Dreamcoat plays through July 29, 2017, at City of Fairfax Theatre Company performing at Sidney Lanier Middle School – 3801 Jermantown Road, in Fairfax, VA. For tickets, purchase them at the door or online.