It’s difficult to imagine a more lush or beautiful production to take the stage at the John F. Kennedy Center for the Performing Arts than Rodgers and Hammerstein’s The King and I. The revival, which originated at Lincoln Center Theater under the capable hands of director Bartlett Sher, is enjoying a long stint in the nation’s capital running now through August 20.

Laura Michelle Kelly and Jose Llana star as Anna and the King, respectively. Joan Almedilla stars as head wife, Lady Thiang (the role for which Ruthie Ann Miles won a Tony in 2015). Joan is a theater veteran who got her start playing the starring role of Kim in the original production of Miss Saigon on Broadway.

In one of those rare but true Broadway stories, she did not find Kim—Kim found her. Born in the Philippines, Joan grew up passionate about singing. She received formal vocal training and moved to the States to complete her college education. Always looking for an opportunity to perform, she sang at an amateur night at the Apollo in Harlem. A Broadway producer saw her performance, tracked her down, and asked her to audition for Les Miserables and ultimately, Miss Saigon. With no acting training, Joan was cast in the leading role of Kim. She went on to play over 600 performances on Broadway by age 24.

In the two decades since her turn as Kim on Broadway, Almedilla toured the country with Les Miserables and Jesus Christ Superstar. She ultimately landed in Los Angeles where she and her husband, film director Charles Uy, call home. After touring, Almedilla performed locally in Los Angeles and took some time off to start a family. Her son CJ was born in 2009. In recent years Almedilla has been busy with her band, Mama Bares and other projects. She increasingly became more open to the idea of going back out on the road again. But how does that fit into her life now as a mother?

The opportunity to audition for the national tour of the King and I arose and she could not pass up the chance to take a crack at Lady Thiang. When her agent called to let her know she had gotten the job, she immediately went into problem solving mode. “He was like, ‘stop right there.’ CJ got the part, too.” Her 7-year-old, CJ, had been cast as one of the royal twins. Almedilla would get to play Lady Thiang and not miss a day of seeing her son. “He loves touring life,” said Almedilla.

Almedilla has played Lady Thiang before but has enjoyed a fresh perspective on the role in Sher’s production. “Lady Thiang is always there. You see her presence more…I view her like a police woman quietly hiding. When you get in trouble, she shows up. What I love about [this production] is that she has this silent leadership. She’s the glue that holds everything together.”

So how does a 21st century American mother find a connection to a 19th century queen of Siam? The gender roles represented in The King and I are quite different than today. “What helped me access Lady Thiang was simplifying everything. It all boiled down to love and loyalty. That I know, as a wife and mom…I stuck with loyalty and love to the King of Siam and to my son who is the next king. Those are the simplest things that helped me.”

And what does parenting on the road actually look like? Much like parenting at home, says Almedilla. “It’s a lot of communicating with your child.” Each night she tells CJ the schedule for the next day. He enjoys a good amount of structure in his day. The nine children in the cast have a teacher who travels with them. The kids have school and get to go on field trips and activities in each city. Almedilla says it’s an incredible opportunity for CJ to read about something in a text book and then visit a museum or a historic site to see his studies come to life. The kids visited NASA in Houston and the Betsy Ross House in Philadelphia.

This production of The King and I is truly a family affair. The cast and crew are comprised of several families: married couples, parents and children, and siblings.

Almedilla is soaking up every moment of touring with her son. “I’m just happy to be Asian American and doing something right now on stage—not only that, but to play a strong character…” And what about introducing CJ to the world of the theater? “I’m just thankful that my son gets to be an actor on stage. When I was his age I’d watch something on television [and be excited to see] someone who looks like me. My son is actually on stage. Other kids are saying ‘I want to do what he’s doing.’ ” 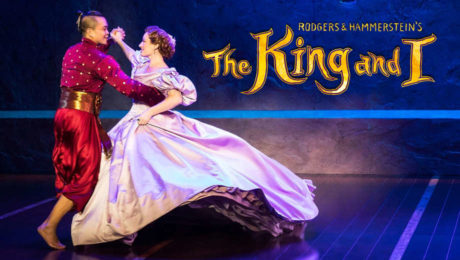 LINK:
Review: ‘The King and I’ at The Kennedy Center by Gina Jun