Last night was a miracle of sorts.

The heavy rains forecast to wash out the Aretha Franklin concert at The Filene Center of the Wolf Trap Foundation for the Performing Arts didn’t show up. And, contrary to her checkered record of performances over the years, Franklin did show up – more or less on time – and knocked the socks off everyone seated beneath the soaring ceiling of the sold-out open air Filene Center and thousands more seated under the stars on the grassy hillsides beyond.

Known as the “Queen of Soul,” the 75-year old has been performing and recording for nearly 65 years. By her teen years, she was already a gospel star.

This star has sung for three newly inaugurated U.S. presidents: Carter, Clinton and Obama, and, at the funeral of the Rev. Dr. Martin Luther King, Jr.

Through the years, up to the release of her current album, RCA’s “Aretha Franklin Sings the Great Diva Classics,” this true diva has had more global hits and classics than almost any recording star still performing today, among them “(You Make Me Feel Like) A Natural Woman,” “Chain Of Fools,” “I Never Loved A Man (The Way I Love You)”; her own compositions “Think,” “Daydreaming” and “Call Me”;  her traffic-stopping versions of “Respect” and “I Say A Little Prayer”; and worldwide hits like “Freeway Of Love,” “Jump To It,” “I Knew You Were Waiting (For Me),” her 1986 duet with George Michael, and “A Rose Is Still A Rose.”

The winner of 18 Grammy Awards, she was listed by Rolling Stone magazine as No. 1 on its list of “The Greatest Singers of All Time.” 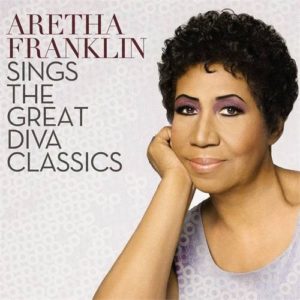 The lady had the audience in the palm of her manicured hand – and had them cheering, clapping and rockin’ on their feet through most of the evening. This was a noisy, happy audience.

And, a festive crowd, though many seemed to sense this might be the last time they’d see this legendary singer in a live onstage performance. Rumors have been circulating that this is her farewell tour.

The stage was filled with stands and equipment for the 19 top-notch musicians who formed her orchestral band, conducted by Music Director Fred Nelson III. An upholstered, plaid easy chair sat smack in the middle of the stage, next to it a side table with a bottle of water and box of tissues.

The orchestra performed the first three of approximately 20 songs they’d play during the evening: “Think,” “Natural Woman” and “Freeway of Love.”

Franklin emerged stage left, wearing a golden brown mink jacket – yes, mink! – over a snowy white, bias cut floor length gown encrusted with sparkly beads and embroidery. Her hair, which in recent years has been cut in a short-curly bob, was styled this time as a straight shoulder-length cut and streaked with medium to golden brown tones.

She looked decades younger than 75. Franklin dove right into “I Knew You Were Waiting for Me” followed by “Sparkle.”

Though she complained about her shoes – tall, platform, sparkly silver evening sandals  – and walked as if in pain, her voice was ageless. From high, operatic notes that she held for a seeming infinity to the low growl of a seductive woman, her range was wide, strong and steady.

After her strong “(You Make Me Feel Like) A Natural Woman,” she sat in the chair to render “Chain of Fools.”

She left the stage for 15 minutes as the band played a gorgeous series of instrumental hits. Above their heads, the video screen, which previously showed Franklin’s “Diva” album cover, incongruously played black and white scenes from a 1937 boxing bout between Joe Louis and Tommy Farr. It replayed the piece three more times.

When Franklin returned, she’d taken off the mink, revealing the off-the-shoulder line of her dress. Showing off her figure, she informed the audience she’d dropped from a size 18 to a size 14 recently. An accomplishment as the diva has had dramatic weight gains and losses over the years.

She went on to rock the house with the throbbing beat of “Ain’t No Mountain High Enough,” “Rolling in the Deep,” and the poignant “Sweet Sixteen.” The band paused its play, allowing the audience to hear her remarkable, crystalline clear voice.

She then seated herself at the Steinway grand piano play and sing “Rolling in the Deep” and “My Cup Runneth Over.” Flawless.

(An aside: While performing at the Steinway grand piano, Franklin announced there was a special guest with family members in the audience. It was the civil rights leader, Rev. Jesse Jackson. He was seated right in front of me. During a break in a song, I leaned over and thanked him for his years of service and extended my hand to shake his. He took it – and kissed it.)

Still at the piano, as an image flashed above the stage of Franklin and President Obama, she thanked the audience for its support and noted it was her 54th year in show business.

“We love you Aretha!” a strong male voice yelled from the audience.

“Okay,” she said coquettishly, batting her eyelashes. “We love you back. Um, where are you sitting?”

She brought the house down with “RESPECT.”

Then. She quietly slipped offstage as the orchestra performed the iconic Ethel Merman song, “There’s No Business Like Show Business.”

At the conclusion, she returned, escorted by her son Eddie, and wearing her mink jacket, to take a final bow.

“I’ll see you again,” she said. The audience nodded: We hope so.

Running Time: One hour and 35 minutes, with no intermission.

Aretha Franklin played for one night only at the Filene Center at Wolf Trap – 1551 Trap Road, in Vienna, VA. For future performances and information, call (877) 965-3872, or check out Wolf Trap’s calendar of events.