Who could guess that a play about the life of the renowned comic book artist, Jack Kirby (August 28, 1917 – February 6, 1994), would be filled with so much humor, pathos and fact-dropping narrative? The play, written by comic book artist Fred Van Lente and playwright Crystal Skillman, is so new, its Kickstarter page is still up. With stunningly real performances and clever direction by Keith Cassidy, King Kirby is top shelf stage art about the world of comics. Kapow!

Kirby was a “tough jew” from the Lower East Side, a place that was a “farm team for the mafia,” a place that forced him to fight in the streets against tough Irish kids. Kirby, driven by his desire to escape the violence, and a life working in the garment industry like his father, became the preeminent creative pioneer of comics for over 50 years. Kirby accomplished so much – World War II veteran, husband, father, even a theater scenic designer – that one show seems not quite enough to cover it all.

Casting puts this show in the top three of the best I’ve seen this year. Josh Mooney embodied Kirby in attitude and physicality. Mooney’s face in many scenes showed the pained expression of a man undervalued and mistreated by the comic book industry.

Much of the show details Kirby’s trek to and fro various comic book publishing companies. The first major company he worked for was Fleischer Studios (creators of Popeye), at which he experienced the tedium of animation; from there it was off to Fox Features Syndicate in 1940. It was Kirby’s collaboration with Joe Simon, a college-educated, business-savvy editor from Syracuse, New York, that advanced his career substantially. Simon and Kirby created Captain America for Timely Comics, which sold a million copies its first run, and other titles like Boy Commandos and Manhunter. Mooney’s scene with Michael J. Dombroski’s Simon, in which Simon implored Kirby to stand up for himself against the wolves in the industry, was one of the strongest in the show.

Much has been written about Kirby’s creative differences with Stan Lee (the astoundingly good Erik Harrison). Did Kirby really create The Fantastic Four and not Lee? Did Kirby create the characters Galactus and the Silver Surfer? Disputes over who created what resulted in a legal battle that only ended in 2014. Lee was more Paul McCartney to Kirby’s imaginative John Lennon. Harrison made me believe I was watching a younger, arrogant Stan Lee, complete with his impeccable accent and habit of munching on peanuts from a small paper bag. As an audience member, I was the proverbial fly on the wall watching comic history being made… or perhaps a Mad Men-style TV show about the comic book business.

The love story between Kirby and his wife Roz was touching. Jenny Oberholtzer channeled a loving wife who, by all accounts, was a pillar of strength who supported Kirby as he produced prodigious output. 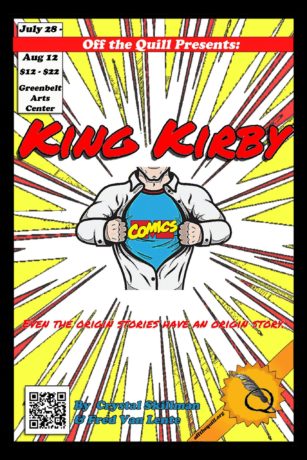 The always-excellent Melissa B. Robinson played everything from a Sotheby’s auctioneer to a flower-child-like journalist, as part of the ensemble. Northwestern High School (this writer’s alma mater) students Jonathan Palmer and Enoch Wilson Jr. played everything from soldiers to Kirby-obsessed fans. Sean Eustis had a comical and somewhat heartbreaking scene with Mooney as a fan meeting Kirby at a comic book convention in the 80s. Brett Cassidy was hilarious as Timely Comics owner Martin Goodman (Lee’s uncle), who was all about sales, not art. Cassidy also played Gen. George S. Patton in profanity-laced, deliciously over-the-top scenes.

Cassidy’s direction was superb. The Manhattan regional accents were perfectly done. The set, thanks to Production Designer and Assistant Director Patrick Mullen, looked like blank comic panels on which various comic book covers, art work, videos and old photographs were projected. One projection, a silhouette of the Incredible Hulk in a rage, perfectly matched the rage Mooney infused Kirby with in one of his scenes.

Brian Moors created effective fight choreography; Katie Wanschura’s costumes evoked various styles in various decades. The show features some adult language, which could be problematic for younger viewers. King Kirby is an absolute must-see; be the superhero of your family and take them to see it.