Join members of The King and I’s royal court as they step out of character for good fun and a good cause at One Night in Bangkok, a one-night only cabaret benefit for Broadway Cares/Equity Fights AIDS at DC’s Bistro Bistro on Monday, August 14. The event will feature Broadway tunes, pop songs, dances choreographed by King and I performers (including the youngest ones!) and a silent auction. Jose Llana, who plays the King on the national tour, will perform. 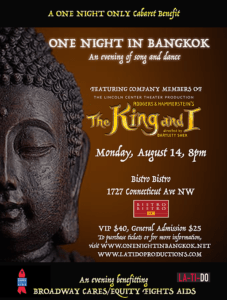 Regular patrons of Broadway theater will recognize the Broadway Cares/Equity Fights Aids moniker. The organization’s mission is to create public understanding of HIV/AIDS and mobilize the theater community to alleviate the suffering of those with HIV/AIDS through fundraising and other efforts.

Since their tour started in November, the National Touring Company of Rodgers & Hammerstein’s The King and I, now playing through August 20th at The Kennedy Center, has raised more than $100,000 in donations for Broadway Cares/Equity Fights AIDS all over the country.

Company members Michelle Liu Coughlin and LaMae Caparas are co-producing the one-night only cabaret. I recently spoke to Caparas – a native of Fort Washington, Maryland – about putting together One Night in Bangkok. “It’s really amazing how passionate the Broadway community is about coming together and raising money for this important issue.” She told me in our phone conversation. “We (The King and I members) have done a lot of creative things to raise money but this will be our first benefit show so we are very excited about it.”

The King and I has partnered with La Ti Do Productions on the event. La Ti Do Founders Don Michael Mendoza and Regie Cabico will be the emcees for the evening. “Don and Regie are very funny and will be great emcees. We are thrilled to have their support.”

One Night in Bangkok is truly a collaborative affair. The show’s wardrobe head, Laci Roberts, is spearheading the silent auction that will include paintings, jewelry and drawings created by member of the cast as well as show props and King and I memorabilia. King and I crew members will control sound and lighting.

VIP admission is available for $40, which includes preferred seating, light hors d’oeuvres and a pre-show reception with company members from 7:00 p.m. to 8:00 p.m. Theater doors open at 7:00 p.m. for VIP ticket holders. Regular admission tickets are available for $25 for the 8:00 p.m. show.

I asked Caparas what it was like being on the road for over ten months and counting with such a big group. “The kids keep us sane.” She told me. “They go on little field trips into the cities that we visit and sometimes we tag along. We also enjoy making fun Instagram videos during our free time backstage. We have a lot of fun together.”

Can’t make the cabaret? Donations to Broadway Cares/Equity Fights AIDS can be made here.

One Night in Bangkok plays one night only on August 14, 2017 at Bistro Bistro DC – 1727 Connecticut Avenue, in Washington, DC. Tickets may be purchased online.