No sooner did some aerial apparatus drop from the fly space—ropes, straps, silks, hoops, trapezes—but what some artist-athletes would take hold of it and make acts of suspended animation. These performances—as balletic as they were muscular, as subtle as stupefying, as mesmerizing as sometimes shocking—were my introduction to DC’s robust circus scene.

They are folks who didn’t have to run away to join the circus. They have found a way to make the circus join them.

The show’s title, Smoky Mirrors, was at first opaque to me, but its subtitle grabbed me: “an aerial exploration of gender and sexual orientation.” And sure enough, wending its way through two acts and 13 scenes was the thread of a narrative about a young woman (the remarkably gifted Montana DeBor) on a quest for an identity that is not divided against itself in the distorting, deceptive gender binary.

At several points, a mirror was wheeled onstage hung with articles of gendered clothing. The young woman tried some on and rejected some, as if trying to find a look faithful to her true self. The title’s allusion to smoke and mirrors began to become clearer, as if to say that looking into a distorting mirror for affirmation of an illusion may be its own delusion.

Or, as Writer and Creative Director Elizabeth Finn writes in a program note,

It is sometimes difficult to see the spectrum behind the dichotomy….
We are working…to reflect the true complexity of human experience, rather than the false dichotomy we have inherited. That means telling the stories of people who do not fit into a tidily gendered box, the people who are most hurt by our violent oversimplification.

In an early scene, a quartet of two women and two men (Alex Reyes, Angela Stoner, Jeff Wagener, and Laura Wooster) did an act on a single wide trapeze wearing typically gendered aerialist costumes. But to a soundtrack of Lady Gaga’s “Born This Way,” they subverted gendered trapeze performance conventions: Not only the men were catchers but the women were as well.

A similar symbolic reversal happened in a duo scene in Act Two when it was the man (Mark Harding) who performed on two swaths of red fabric while the woman (Elise “Teddy” Sipos) performed on a loop of steel chain.

Only one act was not performed aloft: an amusing juggler, Christian Kloc, whose droll and dextrous stunts with plastic bowling pins had a playfully mixed soundtrack of “Dream Lover” by Bobby Darin and “Dreamlover” by Mariah Carey.

Just before an aerial straps act near the end, a half dozen piles of powdered chalk were dumped about the stage in a bright rainbow of colors. Before the act was over, the aerialist, Elizabeth Finn—swinging around in circles, her feet touching the floor, or kicking up colored dust—had blended the hues and inscribed on the stage the trans symbol.

Interspersed in the show were voice-overs, poetic spoken word pieces that amplified the show’s theme. The gist of these is in the title of the final one, an excerpt from a trans and genderqueer anthology, “Dear Gender, An Elegy.”

(The complete program is below.)

Sweet Spot Aerial Productions is a professional circus arts company committed to reflecting LGBTQ characters and themes. It was launched three years ago by four instructors at the DC affiliate of the Trapeze School of New York (Elliot Proebstel, Laura Wooster, Angie Stoner, and Jeff Wagener), as an alternative to the “very heteronormative and very cisgender-role” mindset of mainstream circus arts.

Their first production was during Capital Pride 2015. Since then their audiences have broadened. This summer (June-July 2017), Sweet Spot Aerial Productions was featured in the Circus Arts programming of the Smithsonian Folklife Festival. And in December 2017  the company will present a holiday show titled A Circus Carol, the teaser for which sounds intriguing:

It’s holiday pageant time at W.T. Dickens High School! Chaos reigns supreme throughout the school halls as teachers, administrators and students try to get it together in time for their annual holiday production. Watch as the circus atmosphere comes to life in A Circus Carol, as incredible aerial performances dazzle and bring our characters together to rise above (sometimes, literally!) the holiday madness.

I like discovering theater in performances that are not generally thought of as “theater.” Stories told in unexpected places and performed in unexpected ways can be as engrossing and meaningful for their astonishing form as for their substance. The audience at the performance I attended was digging it. They responded volubly to every virtuoso maneuver, every scary drop, every impossible pose. And though the narrative of a quest for authenticity in a gendered world was more focused in some scenes than in others, it was never far from mind.

Sweet Spot Aerial Productions is on to something deep and delightful. They are embodying important human meaning in a form, circus arts, not typically given to subversive and affirming storytelling. With Smoky Mirrors, the company has defied both gravity and the dichotomy of gender. They’ve got a lot of nerve.

Running Time: 90 minutes, including one intermission. 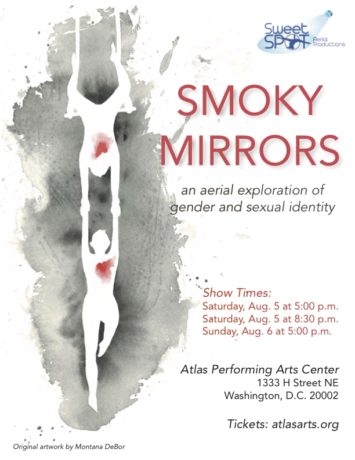