Conceived by Composer and Director Jaime Lozano as a loving tribute to the women in his life and his matriarchal upbringing, A Never-Ending Line, produced by Maribel Escobosa, Martha Orendain, and Victoria Kühne, presents a cycle of seventeen songs written by nine female lyricists set to his original music. The show, which made its New York debut at the Metropolitan Room in July, following earlier performances in Paris and Monterrey, Mexico (where it was translated entirely into Spanish), is now playing a limited run at The Players Theatre, with an all-female cast and orchestra, giving voice to a sampling of personal experiences and perspectives.

The score, with musical arrangements and orchestrations by Lozano and Jesús Altamira, is rich and resonant, with references to a range of genres, from jazz to classical, romantic ballads to pop and show tunes. A first-rate three-piece female orchestra, comprised of Music Director Geraldine Anello on piano, Melanie Mason on cello, and Karen Speyer on harp, provides exquisite accompaniment for the singers, capturing the changing moods of the songs with mastery and sensitivity. Their virtuoso performance could stand alone, as a fully satisfying instrumental version of Lozano’s beautiful music. 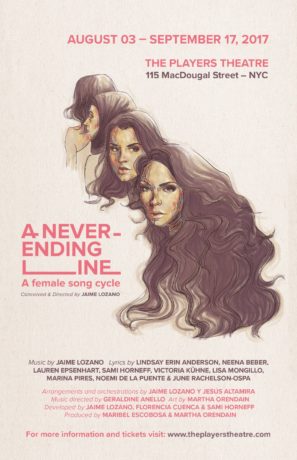 Lyricists Lindsay Erin Anderson, Neena Beber, Lauren Epsenhart, Sami Horneff, Victoria Kühne, Lisa Mongillo, Marina Pires, Noemi de la Puente, and June Rachelson-Ospa make each song a story, with a personal narrative in which one woman pours out her feelings, as she reflects on hardships and struggles (“Lost in the World”), relationships and self-image (“Maybe in Florence”), or the need for love, support, and friendship (“A Never-Ending Line”), with an unwavering message about the strength and resiliency necessary to survive and to triumph. Some tend towards the sentimental (“You My Son” and “Mountain in the Sky”) and some are risibly cynical (“Why I’m Single” and “If You Break My Sister’s Heart”).

Singers Emily Esposito, Kat Blackwood, Florencia Cuenca, and Erica Wilpon show their commitment to the moods and characterizations. Though their vocals are sometimes uneven, each excels at hitting the power notes. And while a few of the numbers are up tempo (“Hello Forty”), the focus is largely on the challenges women face. The show could benefit by embracing more of the joys of education and intellectual development, artistic talents and professional achievements, and the elements of life and the world that make it a pleasure to be an accomplished independent woman.

Costumes by Jaime Torres emphasize the individuality and diversity of women’s taste and personalities. Choreography by Fernanda Aldaz keeps the singers moving around the stage, pushing chairs, standing up and sitting down, patting, hugging, and nodding at each other, throwing up their arms and stomping their feet, and forming the titular line. Though the movement is in keeping with the lyrics, it becomes redundant, and often tends to distract more than to enhance the songs.

Lozano is to be applauded for shining a spotlight on women and giving female professionals in musical theater an opportunity to be seen and heard. We can only hope that this will truly be the beginning of A Never-Ending Line of greater visibility and support for women artists. In addition to the live show, the music will be available as a double-album, in both Spanish and English; the latter features an array of Broadway favorites, including Betsy Wolfe, Daphne Rubin-Vega, Julia Murney, and Emily Skeggs. Proceeds will benefit a selection of women’s organizations.

All I want for Christmas is ‘The Boy Band Project: Holiday Edition’ at NYC’s Feinstein’s/54 Below