Featured this summer in producer Ed Miller’s No Ransom To Be Paid four-part series at Pangea, the presented works of writer/composer/musician/actor Erik Ransom include songs from More Than All the World – his epic musical reinvention of Christopher Marlowe’s bio-play on the life of England’s King Edward II – and an hour-long concert version of his explicitly funny and poignant take on the popular gay dating app GRINDR: The Opera.

The latter, which played on August 7 and returns to the cabaret on August 14, is performed score-in-hand by an excellent ensemble of five, representing a personification of Grindr and four archetypes from the identifying tribes listed on the social-media app. But thanks to Ransom’s humor and sensitivity, the lyrics not only parody the post-modern hook-up site and the cleverly woven inter-relationships of the characters, but also present their backstories and motivations, rendering them as three-dimensional people, not just sexual categories. 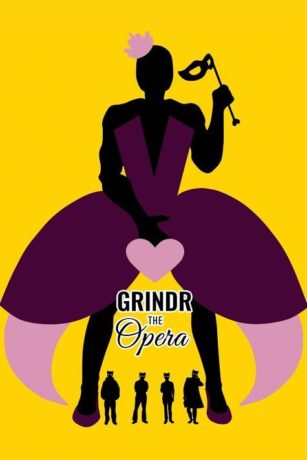 Directed with a balance of outrageous wit, risqué physicality, and sympathetic pathos by Ransom’s frequent collaborator Rachel Klein, the sung-through show contains 22 songs (condensed from the full-stage version’s 30 numbers). Their style references not just the genres of classical opera (“Grindr’s Aria”) and operetta (“Anticipation/The Very Model”), but also rock and pop (with a nod to the Village People in “LOL, JK”) and romantic ballads (“You Can Leave”), with rich and vibrant orchestrations of the tracks by Music Director Andy Peterson.

The current cast members bring their superb voices and engaging acting skills to the show, with powerful vocals and clear definitions of the individual personalities. Drag sensation Courter Simmons, wearing a yellow-and-black masquerade costume inspired by the app’s mask logo, brings down the house as Grindr, in an unforgettable embodiment of the networking media queen that is at once operatic and camp. Rick Roemer, John Jeffords, Devin Holloway, and the hilarious DJ Bucciarelli perform the roles of her users, each seeking a specific kind of connection, with ultimately surprising results.

Following the closing performance of No Ransom To Be Paid at Pangea, the full-stage version of GRINDR: The Opera, licensed by Tim Evanicki Productions, will be presented at venues in Florida and Georgia, including Parliament House Footlight Theatre in Orlando, Empire Stage in Fort Lauderdale, and OutFront Theatre in Atlanta. In addition to his busy schedule of live public performances and new writing, Ransom hosts monthly private closed-group readings of the classics and contemporary works with the Dead Playwrights’ Society and The Living Playwrights’ Society, both of which he founded. He can also be seen as François on the Emmy-nominated Amazon series Tainted Dreams and as Matthew in Love Drunk Life’s musical mockumentary Happy Yummy Chicken. 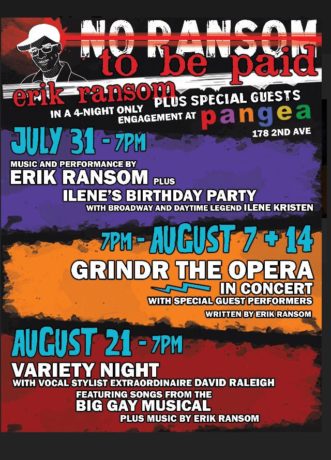