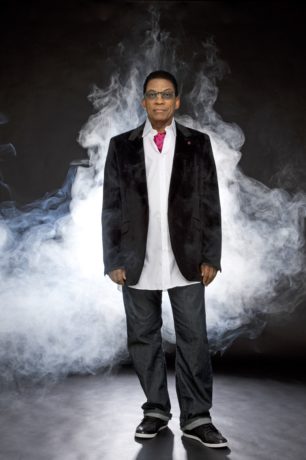 Fastidiously accompanied by drummer Vinnie Colaiuta, bassist James Genus, guitarist and vocalist Lionel Loueke, and keyboardist/saxophonist Terrance Martin in an expansive, full-band summer tour, Hancock appeared relaxed and upbeat, dressed in an unassuming black suit and shoes that looked comfortable and pragmatically-styled for him to seamlessly toggle between his grand piano and bank of synthesizers.

From the instant the now 77-year-young Hancock made his courtly entrance, audience members quickly rose to their feet and erupted in enthusiastic applause.  With a beaming smile of appreciation, Hancock and his band launched into a 20-minute opening medley of futuristic sounds and abstractions with alternating pivots of the keyboards and saxophone.

Sprightly and engaging, Hancock welcomed the drummers in attendance, segueing into the introduction and celebration of his accomplished band members: Colaiuta (who has played with Sting, Zappa, Joni Mitchell and Faith Hill), Genus (currently, a member of the band on NBC’s Saturday Night Live), Loueke (a member of Blue Note’s 75th anniversary all-star band with Glasper, Hodge, Scott, Ambrose Akinmusire, and Marcus Strickland) and Martin (producer of Kendrick Lamar’s To Pimp a Butterfly) – each an acclaimed artist in his own right.

Playing six protracted freestyle remixes, which spanned back to the classic, “Cantaloupe Island”, the two-hour concert leaned heavier on familiar fan favorites such as, “Actual Proof” and “Chameleon” but infused with renewed vitality. For instance, “Come Running to Me”, a track from the 1978 crossover album, Sunlight, was inventively reimagined with the melody sung through a vocoder, which gave it a fresh lift.

Hancock capped the evening in rock star fashion with nearly everyone in the theater gathering by the stage taking videos and photos, as he and his band performed a hyper-extended encore of the 1983 hip-hop/jazz, international dance-club smash, “Rockit”. Likely a Kennedy Center first.

Herbie Hancock performed on August 8, 2017, at 8:00 PM at The Kennedy Center’s Concert Hall – 2700 F Street, NW, in Washington, DC.  For more information on upcoming shows, go to their website.