The Lafayette siblings – Toni (Alex Vogelsang), the eldest, a former vice principal and divorced mother of a troubled teen; Bo (Christopher Damen), the middle child seemingly living the American dream in New York City; and the youngest, Franz (Brennan Lowery), formerly known as Frank, a reformed drug using alcoholic with a shady sexual past – have not been together for nearly a decade. Due to their father’s death, they are reunited on the old family plantation in southeast Arkansas to settle his estate, which is deluged with hoards of junk. While seeing what they can ‘appropriate’ from the house to raise some money to pay off the property debt, they come across some highly disturbing photos, and pickled body parts(!), which apparently belonged to their recently departed father. It’s a discovery which serves to touch off another round of family feuding.

Each of the siblings has a differing view of the father. Bo believes their father was just a product of his times, Franz feels that the old man was bipolar, but Toni denies any evidence that her beloved father, whom she had been looking after for years, was in any way truly attached to the heinous acts witnessed in those images. Although the siblings feel the photos are inappropriate material for their children’s eyes, they are not above selling them for a hefty profit. Jacobs-Jenkins takes all of the sensitive factors listed above, and more; stirs them together in an already heated emotional mix; adds significant others and offspring; then boils and shakes until the toxic familial past explodes into the present. But what of the future?

Director Tatiana Pandiani builds beautiful, powerful tableaus upon Joseph Haggerty’s phenomenally detailed set, each one depicting a moment in time, yet setting up and yielding smoothly to the next scenario no matter which way the energy of the next scene is spiking. The ensemble delivers superb performances in the play’s exacting roles. Vogelsang masterfully embraces the embittered Toni, imbuing her with a soul and a stinging satirical tongue. Damen achieves the balance of Bo, who must keep up a façade for his eagerly ambitious wife, Rachel (well-played by Olivia Levine), and he is believable when breaking down as well. Lowery deftly depicts a Franz who is working at forgiveness, disengaging his arrested development, and trying to grow forward with the spiritual help of his very young New Age vegan girlfriend, River, played with panache by Olivia Nice.

Friction indeed finds its way to the children, of course. Rhys, Toni’s troubled teenage son, solidly portrayed by Noah Riley, seems to be following in Uncle Frank’s derelict footsteps, while Bo and Rachel’s daughter, Cassidy, given delightful teen kineticism by Meagan Raker, is open and curious about her family. As her little brother Ainsley, Sawyer Berness’s expressions are spot-on.

Aidan Gray appears to takes stock as the realtor at the very end of the production as Sydney Becker’s ingenious lighting design serves to illustrate the house passing through time towards utter dereliction and decay. The Lafayettes have once again departed ways, leaving the house and its hatred haunted past behind to wither as Sam Bezilla’s permeating cicada soundtrack plays on. The specter of the sound stays with you, as does Branden Jacobs-Jenkins’ Appropriate. 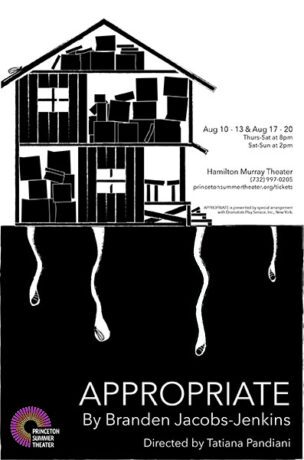 Appropriate plays through August 20, 2017 at Princeton Summer Theater, performing at Hamilton Murray Theater in Murray-Dodge Hall on the campus of Princeton University in Princeton, NJ. For tickets, call (732) 997-0205, or purchase them online.